'Why do they want to kills us': Raila's supporters served tear gas, bullets 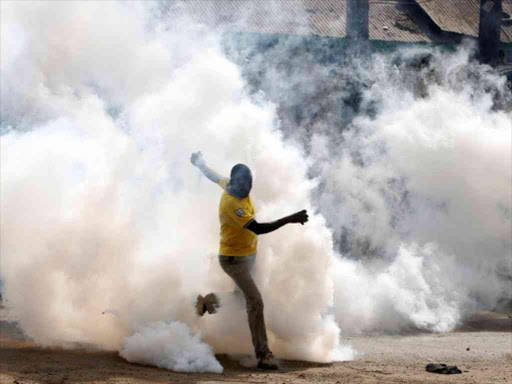 Tear gas, gunshots and running battles were the order of the day for NASA supporters as they welcomed their leader Raila Odinga back from US.

Preparations were in advance and a large crowd was anticipated despite a warning by IG Joseph Boinnet.

But Raila's supporters gathered outside the JKIA in Nairobi on Friday and waited for him to land.

On foot, on motorcycles and atop cars, crowds shouted pro-Raila phrases and escorted the motorcade out of the airport. Lawmakers were also in the crowd that proceeded to central Nairobi.

TV stations aired scenes from the protests during which sounds of gunshots and the firing of tear gas filled the air. The stubborn supporters took cover but some regrouped and returned to the streets where they threw stones at police in retaliation.

Others lay on the ground to keep from choking in clouds of tear gas.

Crowds surrounded the convoy of the 'people's president' as if to keep him from harm as the vehicles headed to Kibra for a rally.

The windscreen of his Range Rover was damaged.

Those who had encountered tear gas washed their faces and joined others in song and dance on the streets.

"We will resist all forms of intimidation," one was heard saying.

The term 'resist' has not left supporters' mouths since NASA MPs chanted it while announcing a boycott of products by Bidco, Brookside Dairies and telecommunication giant Safaricom.

Some of the people angered by police response picked up the canisters they fired and hurled them back. The number of officers increased as the crowds became more unruly.

A standoff ensued on Haile Selassie Avenue when police intensified their counter. Some were seen picking stones and throwing them at the crowds.

Guns were loaded as the demonstrators ran in different directions.

"Wananchi tibim! Wanachi fire! Wananchi Riaat," went the chants as the cat and mouse games carried on and so did police operations.

Leaders who accompanied Raila claimed he was a target by Interior ministry spokesperson Mwenda Njoka dismissed the reports as "false and absolutely baseless'.

Raila is expected to comment on the events and give his supporters direction.