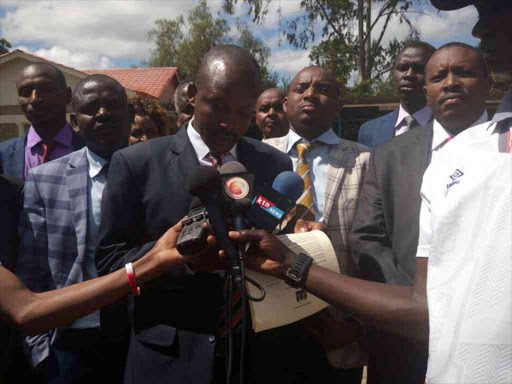 Politicians eying huge chunks of land in Laikipia, whose leases will soon expire,

are behind attacks on Samburus, leaders have said.

Legislators said the looming expiry of the 99-year leases has fueled fights pitting police and ranchers on one side and herders on the other.

Majority leader Christopher Lentukunye said people behind the scheme have resorted to victimising and treating Samburus living in Laikipia "like wild animals".

"They want to have it easy grabbing the parcels of land occupied, possessed and customarily owned by Samburu people."

The Wamba North MCA noted members of the community were the original occupants of the disputed land which was seized by colonial administrators.

This is because they boycotted the repeat presidential election on October 26, the leaders claimed.

"They feel the community will not support them in 2022 and therefore must be evicted," Letura said

In a joint statement on Tuesday, the ward representatives vowed to stand with herders. They said they will use

legal structures to see to it that members of the community and their property are protected.

This came after 300 livestock were shot dead by police officers in Ol Moran area.

Samburu West MP Naisula Lesuuda urged leaders from the neighbouring county to soften their stance on the issue of grazing areas.

Lesuuda said the leaders seem unprepared to solve the problem yet are determined to see herders, including permanent residents, return to Samburu.

"It cannot be that our entire community is lumped together and everyone called an invader, illegal herder and bandit," she said on Wednesday.

Lesuuda urged leaders in the region to look into lasting solutions as not all herders in Laikipia are criminals.

"The minority community in Laikipia needs to have their say. They must be respected," she said, noting it is wrong to interfere with people's sources of livelihood.