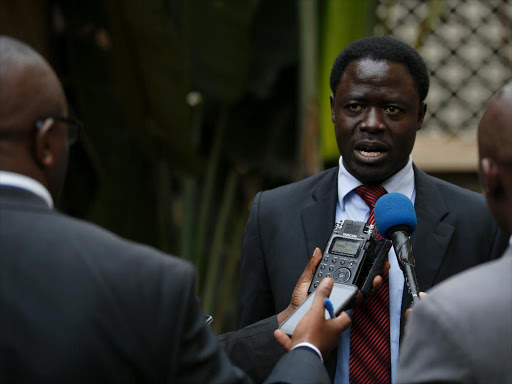 In the Bill to be tabled in Parliament, Kaluma wants 40 out of the 47 counties to secede and form the People’s Republic of Kenya.

Kaluma argues that these counties have continually been discriminated upon by successive governments.

The Bill says while all important public appointments have remained the eternal; preserve of a few, the national budget is permanently skewed to benefit a few groups, communities and regions while marginalising the rest.

The MP says the rest of the country has been rendered mere tax payers without corresponding rights to equal opportunities and service.

According to the Bill, the People's Republic of Kenya would include major counties such as Nairobi and Mombasa.

The People's Republic would consolidate vote-rich areas such as the Rift Valley, Western Kenya and the Coast.

The seven counties that would form the Central Republic of Kenya are Nyeri, Murang’a, Kiambu, Kirinyaga, Nyandarua, Embu, and Tharaka Nithi.

"The objective of the Bill is therefore to amend the constitution to split to allow for the creation of a new state to give effect to the aspirations of the people of Kenya," Kaluma's Bill reads.

He has accused President Uhuru Kenyatta's administration of being ready to do anything including "political assassinations, manipulations of ethnic census and voter register, flagrant rigging of elections, systematic suppression of other groups and communities to retain political and economic power".

Kaluma argues the marginalised communities do not feel fully and equally Kenyan and are determined to halt the current state capture.

host of Opposition MPs from the region.

If Kaluma's Bill goes through Parliament, he will need two-thirds of the members in the National Assembly (233 of the 349) and the Senate (45 of the 67) to support it.

Currently, Jubilee has a majority in both Houses.

But should the Bill be passed in both Houses the Speakers would present it to the President who will ask IEBC to conduct a referendum in 90 days.

Alternatively, the MP can collect one million signatures, which are then certified and presented to the electoral agency.

IEBC would forward the Bill to all the 47 county assemblies and 24 would have to support it for it to be tabled in Parliament.

Should any of the two Houses fail to pass it as law, it will be subjected to a referendum.