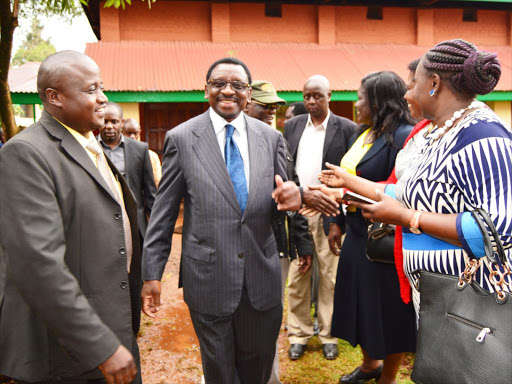 Siaya Senator James Orengo(C) with the Kakamega County Assembly deputy speaker Leonard Soita(Left) and MCAs ahead of the debate on the motion for the formation of the people's assembly, November 9, 2017. /CALISTUS LUCHETU

Laikipia MCAs have rejected the National Super Alliance (NASA) call for formation of saying the move is not welcome in the county.

Majority Leader Peter Thomi said at the assembly premises on Friday that the opposition is focused on confusing Kenyans.

The Githiga MCA said over 400,000 residents of the county would not be distracted by few individuals who are out to benefit themselves.

"Raila Odinga had time to go to school and study and earn himself a living, why would he try force people to follow him while they are hungry, impoverished and hopeless."

Thomi said that the opposition was out to destroy the country’s economic gains and has failed to provide alternative leadership.

"We will not listen to them."

He said the political tension in the country has seen many, including security officers, killed, private lands invaded, livestock stolen, women and young girls raped.

Nominated MCA Irene Wachuka took issue with the opposition's call for boycott of products and services from certain companies saying the move amounts to economic sabotage.

She said they have not heard the ODM leader speak out against killings in Laikipia as well raids at private ranches in the area.

"Let him not try to step in this region because he will meet the wrath of women," Wachuka said.

However, Raila has on many occasions stood out to condemn attacks against communities in Laikipia further calling for a permanent solution to the conflict over grazing lands.

He blamed the private ranchers of hiving off chunks of land leaving residents with no space to graze their animals.

She noted that the NASA leader is only agitating for a space in the national government.

The former Nyahururu town deputy mayor told Raila to direct leaders elected on NASA ticket to resign from their positions.

The opposition is pushing for the creation of the assemblies for discussions on the matters of electoral injustice.

The groups have been embraced in most of the NASA-leaning counties.