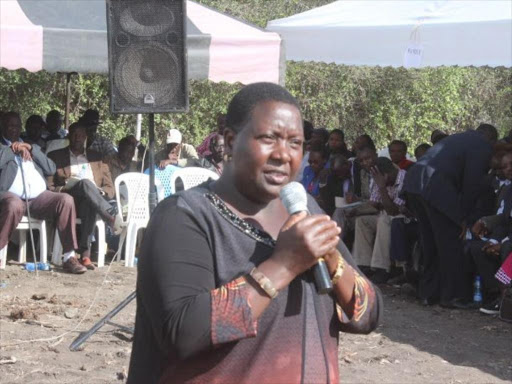 Kajiado MP Peris Tobiko has linked NASA to the recent killing of 300 cows in Laikipia.

Police claim the cows were between bandits and officers but the

MP claimed officers involved in the killing were "acting for the Opposition to sabotage the economy".

Jubilee supporter but when the rights of my people are trampled upon, I will stand up with them and demand for justice. How have we wronged those around us?" Peris asked in Isinya on Wednesday.

"The Maasai communities of Laikipia, unlike those in Kajiado, never sold their land but were forcefully leased out to colonialists," she claimed.

"I am now advising my good government not to renew expired land leases in Laikipia and instead revert back the property to their original owners."

"Because of our cordial relation with the Tanzanian Republic as a state of Kenya, I don't wish to barrage Magufuli for his unwarranted actions but to seek heavenly intervention to change him," she said.

More than 1,300 cows were auctioned near Arusha in October for about Sh93 million. Tanzania’s Minister for Livestock and Fisheries Luhaga Mpina said they feared the cattle would spread dangerous diseases.

after Tanzania police burnt to death 6,400 day-old chicks on suspicion they could spread bird flu.

Tanzania’s regional livestock boss, Obedi Nyasembwa, said the chicks, worth about Sh554,000 (Tsh12 million), were smuggled from Kenya and were a health risk.

On Tuesday, Magufuli said Tanzania is not a grazing farm for Kenya, adding that he will take stern, legal action against those trespassing with animals in the country.

He asked Kenya to reciprocate by confiscating Tanzanian livestock that cross to its territory illegally.

Kajiado Governor Joseph ole Lenku termed Magufuli's remarks 'shameful" and accused him of creating a wedge between the Maasai communities living along the border of the two countries.

Other leaders, who spoke before the MP during the burial of Isinya businesswoman Lucy Mareru, threatened to frustrate Tanzanians' interests in Kenya until Magufuli comes to his senses.

Saoyo said he will rally the support of all the elected and nominated MCAs in the assembly to tell their voters to boycott all Tanzanian goods crossing into the country to protest the leadership of Magufuli.