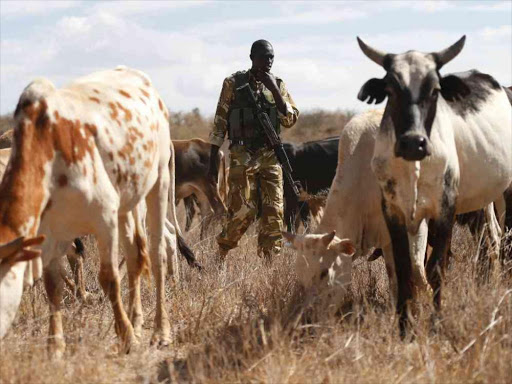 A KWS ranger drives out cattle from a ranch in Laikipia on March 10, 2016. / Jack Owuor

Jubilee MPs from pastoralist communities took their differences to the National Assembly over the recent killing of cattle in Laikipia by police.

The MPs clashed before session speaker Soipan Tuya over Wednesday last week's shooting of over 300 heads of cattle at Olmoran, Laikipia county.

"We are going through pain and trauma as pastoralists. It is hurting to lose such a huge number of livestock through bullets."

"This is like uprooting coffee or tea in Central Kenya," Tobiko said.

She said there has been inequality in occupation of land in Laikipia adding that there is need for the huge parcels of land to be reverted to the original owners.

But Laikipia West MP Patrick Mariru said armed herders from neighbouring counties have over the years been invading private farms.

Mariru said 50 people, including six policemen, had died and 80 others injured in the hands of herdsmen.

"This issue has been going on for many years. It is good that it has found its way into this House. Why do the herders look for pastures, while armed with guns?"

"Who will speak for those small-scale farmers who have suffered in the hands of the herders?" he asked.

But Tobiko interjected saying, "Mariru is trying to bring sideshows on this serious matter. It doesn't matter who owned the livestock. Why kill them by the bullet?"

Samuel Moroto of Kapenguria said a commission of inquiry should be set up to probe the matter.

He ruled out claims there was exchange of fire between the police and herders, saying no herder was injured or killed.

Samburu North MP Musa Lentoimaga appealed to the Independent Policing Oversight Authority to investigate the incident and come up with a detailed report.

But nominated MP Cecily Mbarire said: "We must look into this issue from both sides of the coin. We must also consider those farmers who have not harvested anything, because of invasion by herders."

He said that only 75 animals were gunned down.

Musyoki said most of the animals were grazing illegally from the neighbouring Isiolo and Samburu counties.

He said the livestock belonged to senior politicians, including their families, and government and judicial officers from the area.

"Soon, we shall name and shame them. They are all over in press conferences in Nairobi, claiming the government is killing their livestock, while in essence they are funding these militias," Musyoki

He said the county had lost eight police officers, 14 civilians and property worth millions of shillings in attacks.

Women and girls have also been raped, he added.