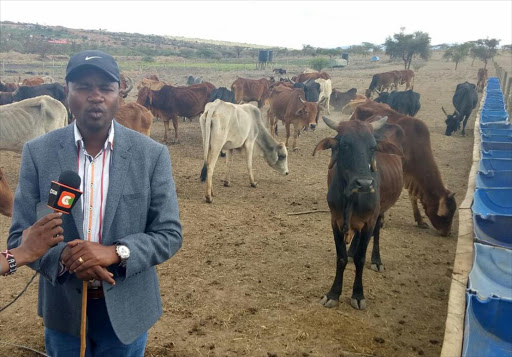 Memusi said in the event that it is established that the government committed atrocities against the Maasai communities in Laikipia, the Jubilee administration will never have peace.

The ODM MP was reacting to the killing or more than 300 livestock last week belonging to the Maasais in Laikipia.

He said that before any action is taken against the culprits who committed the atrocities, "Matiang’i and Boinnet should have exited like yesterday to pave way for investigations".

"This should be the case before we go for the trigger-happy policemen who opened fire on the livestock," he told journalists at his farm in Kajiado.

"More than 5,000 people depend either directly or indirectly on the slain livestock. Therefore, those who committed the alleged heinous act will never have peace."

The legislator said the government must stop treating the Maasai people as though they are a lesser community than others in the country.

"We pay taxes like the rest of the people. No one, even the mighty, will go scot free on this one," the MP said.

He promised to rally all the Maasai communities countrywide to revolt against Jubilee administration.

"Five years is not a long time. Let them know that the blood of our cows, slain on our ancestral land, will not fade away in vain," Memusi said.

The legislator said it is now a known fact that Jubilee administration has never meant well to the pastoralist communities, and especially the Maasai.

On November 1, police in Laikipia, through instruction of the county commander Samuel Kipkeu, opened fire on the livestock alleged to have trespassed into a private property.

Kipkeu swore to protect the rights of private land owners in the event the local Maasai will continue invading their land property.

Over the years, there have been clashes between private land owners and the local Laikipia residents over grazing rights.

The government is yet to find a lasting solution on the matter.

NASA leader Raila Odinga on Saturday joined Maasai leaders who have condemned the killing of the livestock.

He described the killing as "most open display of impunity and utter disregard for the livelihoods and survival of long marginalised communities".

On Friday, Kipkeu confirmed that unknown number of cattle were killed at Ratia area when the pastoral communities attacked the police on Wednesday.

He said the law enforcement officers were patrolling the private ranches in Olmoran and Rita.

The police boss said he will continue protecting private land owners from "invaders" into their properties.