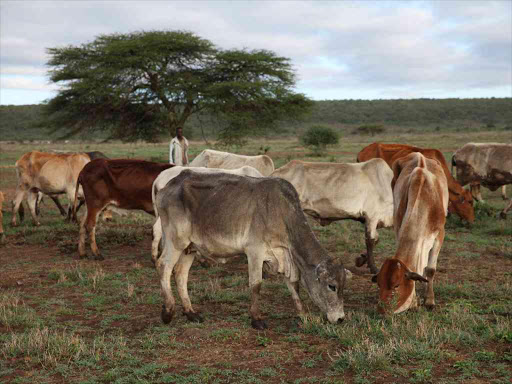 Cattle on Ol Maisor cattle ranch in Laikipia county which has been occupied by armed herders, May 9, 2017. /THOMSON REUTERS FOUNDATION/KATY MIGIRO

asked the government to carry on with the eviction of illegal herders despite protests by some leaders.

Muriithi praised the government for resuming the evictions, noting peace will be restored and sustained.

He said on Monday that the government cannot relent as all the herders must be evicted.

Muriithi regretted that groups believed to be from Samburu have been going to Laikipia in large numbers.

Last Wednesday, more than 300 cows were killed during a shootout between herders and officers in Ratia, Laikipia North.

The herders who were heavily armed used cattle as shields, Kipkeu said, adding 300 animals were killed.

The Governor asked the national government to ensure people whose farms were invaded and families of those killed are compensated.

"The invasion has affected many families...that is why we are asking for compensation. Illegal herders have destroyed crops worth millions of shillings. Among those who lost their lives were six police officers killed at Matwiku four months ago."

Sossian MCA Jacob Edung supported the eviction as the ward has been severely affected by the invasions.

Edung said hundreds of residents have fled since the invasions started so their main aim is for peace to be restored.

"The government must make sure more police officers are deployed to the region," he said.

But police have been condemned for using excessive force against herders accused of invading private ranches in Laikipia.

The National Cohesion and Integration Commission said officers were brutal to herders and livestock and that they also destroyed property.

Chairman Francis ole Kaparo warned on Friday that police action is likely to stir violence and spark more tension in the area.