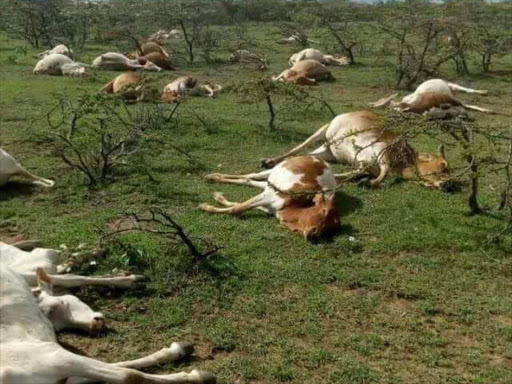 Some of the cows shot dead by police in Olmoran area on Wednesday. COURTESY

in Laikipia North, saying the animals were caught in a crossfire.

opened fire at the police

while hiding amidst the cows.

The shooting took place in

Addressing the media in Nanyuki town on Sunday, Kipkeu said the illegal herders were heavily armed and started shooting at officers on patrol.

He said the herders from Samburu and Isiolo counties had arrived a week prior to the October 26 repeat elections and invaded private farms.

“The herders were so daring that they started shooting at the Armored Personnel Carrier. Our officers fired back and that is when the animals

were killed in crossfire,” said Kipkeu.

He noted that some herders could have escaped with gunshot wounds.

The police boss said he is liaising with his fellow commanders in the neighbouring counties to establish whether the injured herders could be receiving treatment in their health facilities.

In the last four months, eight police officers have been killed in the area by the armed bandits and fourteen others injured.

Some parts of Laikipia have been gazetted as a disturbed and dangerous.

Kipkeu also refuted claims that Kenya Defense Forces were involved in the operation to flush out the immigrant herders.

Laikipia North legislator Sarah Lekorere also faulted the security officers over the shooting of livestock, arguing that others methods could have been applied to drive them away.

“These animals did not lead themselves to where they were, they were led. It was wrong to shoot dead about 300 heads of cattle," the MP said.

The incident occurs at a time when there are allegations that a senior official in national government and two members of parliament from Samburu County squandered Sh1billion disbursed by the national government to caution pastoralists against drought four months ago.

It is said that the three shared the money instead of buying grass for the livestock, an issue that has raised a lot of concerns from the pastoralists.