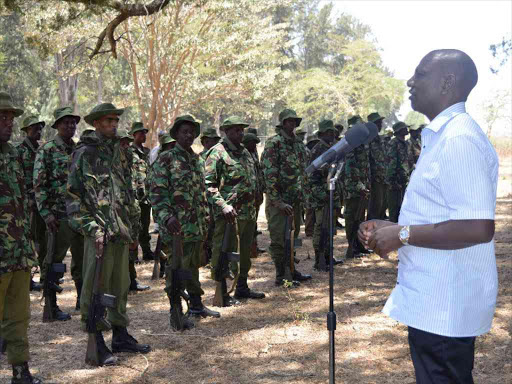 NCIC has condemned police against using excessive force in the operation to flush out pastoralists invading Laikipia ranches.

Chairman Francis ole Kaparo warned on Friday that police action is likely to stir violence and spark more tension in the area.

Last week's operation conducted resulted in huge losses and the killing of more than 300 cattle.

"We term the police action a threat to the fragile peace and cohesion in Laikipia and the neighbouring Samburu counties," Kaparo said.

"We urge the security to devise humane means of conducting the operations to avoid sparking tension among the residents."

The commission has called for constructive dialogue on the matter to avert any loss of lives and properties.

The National Cohesion and Integration Commission said it supports the operation as long as it is carried out within the law.

"We are asking resident to stop taking matters into their hands. Let there be a constructive dialogue on the matter to avoid tension," Kaparo said.

The NCIC boss, in a press briefing at the commission's Nairobi office, said relevant agencies need to work towards an agreeable approach to solve the row.

The security operation was launched after armed herders invaded the secured ranches in search for pasture following a prolonged dry spell.

In February, an invasion by armed pastoralists into the 24,000-acre Sosian conservancy saw property worth billions reduced to ashes.

Three houses were burned down at the ranch in Nanyuki as the herders sought to displace owners.

Later in April, the herders shot renowned rancher Kuki Gallman during a raid at her ranch. She survived after a successful operation to remove the bullet.

Following these incidents, the government classified the areas as disturbed and dangerous, hence the operation to flush out the herders.

In a recent interview with a local TV station, IG Joseph Boinnet defended the police operation saying it will only be called off after the area is secure.