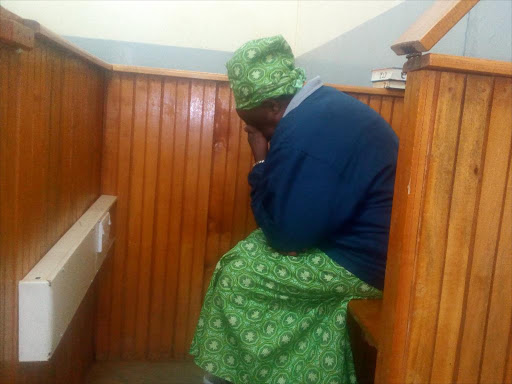 has filed an appeal against their divorce saying the grounds were improper.

Chief magistrate Charles Obulutsa granted the divorce on October 6 on grounds including cruelty and "irreparable brokenness".

After the ruling that ended his 51-year marriage, the businessman and farmer said he can now "live longer".

He had accused his wife of cruelty, desertion and interfering with his land at Kipkabus. The court agreed with him

on all grounds except desertion, which his lawyers could not prove.

But Josephine has cited 18 grounds to oppose the decision by the lower court.

In her memorandum of appeal served to Kibor's lawyers, she

says there was no evidence of cruelty.

She says Obulutsa made a mistake by taking into account her behavior on one particular day as a ground to nullify the marriage without considering why she acted that way.

At one point during the hearing, the woman wailed and shouted at Kibor, causing the magistrate to say in the ruling that this showed she was capable of cruelty.

"If she could do so in court what about when they are at home?" Obulutsa asked.

He also said: "The behaviour of the respondent caused the petitioner mental torture and anguish. She was rude and disobedient to him and efforts to have them reconcile cannot work."

Josephine argues that the particulars were vague and too general and could not amount to cruelty in law.

She says the magistrate made a wrong decision, acted unfairly and occasioned

"The learned magistrate erred in law, and in fact, in holding that Kibor had proven claims of cruelty against him, despite lack of evidence of that fact in strict adherence to decisions by higher courts."

Josephine also faults the magistrate for asserting that there had been no efforts to reconcile the two yet "there were no differences in the first place to warrant reconciliation".

The woman adds her decision to place a caveat on their land at Kipkabus was also wrongly used by the court as she has the right to protect her interests in the property.

She further says Obulutsa failed to consider that in the 51 years, she had never considered returning to her parents' home because of disagreements with her husband.

Josephine accused the court of showing open bias against her during the hearing and failing to exercise discretion judiciously.

Obulutsa had ordered that Josephine and Kibor's certificate of marriage be cancelled in the case filed by the 83-year-old politician.

"Kibor’s petition for divorce is granted and the respondent has 30 days to appeal," he ruled.

One of Kibor's lawyers Richard Wainaina said they had received the memorandum of appeal but will respond after their client gives them directions.

The High Court will then set a hearing date.