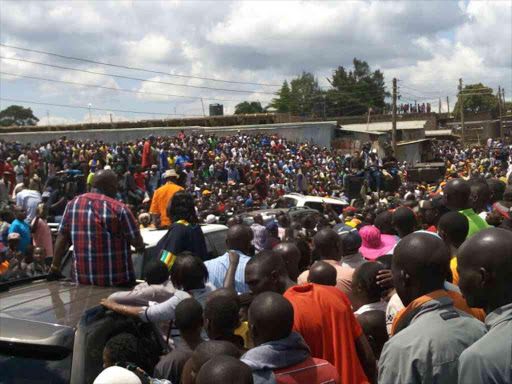 a country cannot be led by the barrel of a

Raila addressed residents of Kawangware in Nairobi after a man was beaten to death during violence following the presidential re-reun.

He decided not to face President Uhuru Kenyatta again over lack of reforms at IEBC and told his supporters to keep off voting centres.

Raila said: "Politics should be left to politicians and our security officers should keep off."

claimed the police brutality meted on citizens in NASA areas is retaliation by Jubilee Party for rejection by Kenyans.

The leader of a national resistance movement noted tribalism is Kenya's biggest and that some politicians are capitalising on it by using gangs from their tribes to attack other communities.

He demanded the politicians be arrested and charged but did not name them.

Raila said the National Super Alliance cannot allow the country to be led into a dictatorship.

"Kenya needs to be saved because citizens are suffering," he said. "Tribalism has caused discrimination and desperation."

He promised his supporters that the coalition will make a major announcement on the way forward on Monday.

IG Joseph Boinnet denied police are using excessive force on protesters, saying they are only ensuring peace. Police bosses in some of the affected regions have also denied the claims.