In edgy Kawangware, a rumour ends in fires and a death 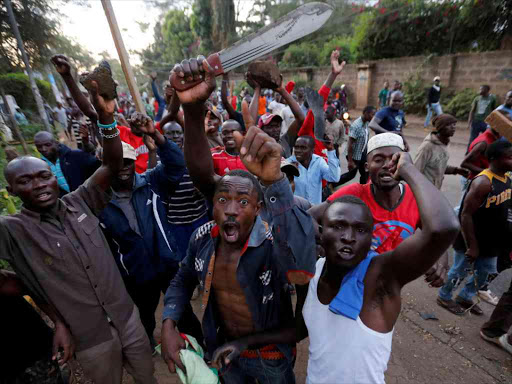 Protesters take to the streets in Kawangware slums in Nairobi, October 28, 2017. /REUTERS

It all started with a rumour: the Mungiki, a dreaded militia, had infiltrated Nairobi's Kawangware slum. Within minutes, local men already fired up by Kenya's divisive election had grabbed machetes and sticks to defend their turf.

By the end of Friday night's confrontation, a man had been beaten to death and rows of shops and homes set alight, a worrying taste of how quickly ethnic violence can erupt in Nairobi's volatile slums.

Almost all the 50 deaths since August's presidential vote have been in clashes between protesters and police.

The deeper fear of Kenyans is that the months of political strife, exacerbated by the courts annulling the August vote, eat away at deep tribal divisions and ignite a wave of inter-ethnic violence, as happened after a disputed 2007 vote when 1,200 people were killed.

The Kawangware fighting was sparked by rumours that members of the Mungiki had been called to protect some poeple from opposition supporters.

On Friday, a Reuters witness saw a group of men armed with machetes, known locally as pangas, on the streets of Kawangware.

Their identity was unclear, although several residents said they were Mungiki, brought in after opposition loyalists burnt down a prominent business the previous night.

The Mungiki, notorious for castrating and decapitating victims, were blamed for hundreds of deaths in the 2007 clashes. Their relative quiet since has not diminished their reputation.

"They were more than a hundred, and they were carrying all new pangas," Vitalis Aloyi, a Kawangware resident, said.

Another man said residents had to act to defend themselves.

"We had to teach them not to bring Mungiki here. If they bring Mungiki, we will destroy their property and their lives," said Kennedy Ochieng.

As the pro-Odinga vigilantes, also armed with clubs and machetes, swept down the muddy street they set fire to businesses suspected of hiding Mungiki militiamen, Ochieng said.

One man was killed, and his body burned, leaving a charred spot on the road. Some Raila supporters denounced him as Mungiki, but no one could explain how they knew.

The next day, with smoke still rising from the twisted wreckage of homes and shops, the remaining traders in Kawangware began loading their wares of pipes, popcorn machines and meat onto trucks.

"[People are being targeted] because of voting," said Stephen Kamau, whose fruit stall was burned down. "These people will come back and burn more."

Others in the district, long home to mixed communities, said the truth was more nuanced. As political tensions rose, some businesses had hired local youths for protection, said Rhoda Kungu, a market trader.

She insisted the vigilantes were not Mungiki.

"We are all brothers and sisters. We just want to live in peace," she said.

Another trader, Brian Njenga, said it may merely have been pro-Raila youths spotting a chance to enrich themselves, demanding protection money or looting businesses before they burned them.

"Some people are just using this situation to get personal benefit," Njenga said to sombre nods from a crowd of youths around him. "Many have not worked for a long time because the economy is very down."

A few hundeds meters down the rubbish-strewn road, hundreds of young men milled around on street corners. Teargas from the night before lingered in the air.

"We want to kill Mungiki. They must know this is our territory," one man shouted. "Don't think because it is quiet now that we are at peace. We are just waiting for something!"