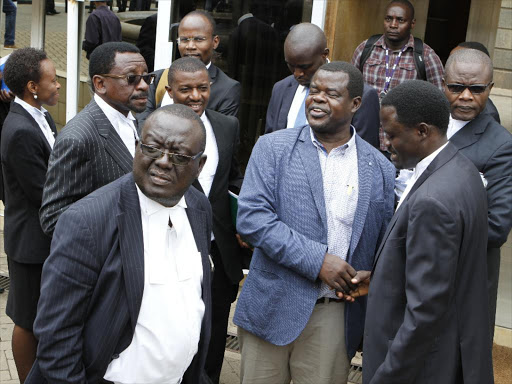 NASA lawyers outside the Supreme Court after the court declined to hear a case to postpone elections due to lack of quorum, October 25, 2017. /MONICAH MWANGI

The EU EOM has consistently called on all parties to respect the rule of law and the independence of institutions.

This morning, most of the judges were away and the Supreme Court did not achieve the necessary quorum to hear a petition for a delay to the poll.

The lack of a quorum is highly unusual for a Supreme Court hearing and has raised serious questions among Kenyan stakeholders, including about possible political interference.

Hearing the case today was critical for an adjudication on the election before polling, due to take place tomorrow (Thursday 26 October).

Not hearing this case has de facto cut off the legal path for remedy. Courts have a fundamental role in adjudicating disputes in electoral processes, and in so doing providing access to remedy in case of problems or disputes.

Access to legal remedy is a fundamental right enshrined in the Constitution and international law.

The EU EOM will continue to assess the extent to which the judiciary has the opportunity to fulfil its election-related responsibilities, and whether any obstacles are put in its way.

The EU EOM calls on all sides to take up grievances through judicial channels, as any alternative to this undermines the Constitution and public security.

The EU EOM will continue observing the extent to which the division of powers is guaranteed and protected, as this division is an essential part of a credible election.

We repeat our appeal to political actors to come together and overcome their divisions, in the interest of all Kenyan people.

We call on all to respect the rule of law, the separation of powers, and to grant each other security, rights and freedoms.

The inability of the Supreme Court to hear today’s case raises serious questions about due process and opportunity for remedy, which undermines the credibility of the election.

It would have been much preferred for the Court to have had an opportunity to rule on this case, in line with the Constitution and before the election, in freedom and safety.