No sex until you vote for Uhuru, Nyeri women tell their lovers 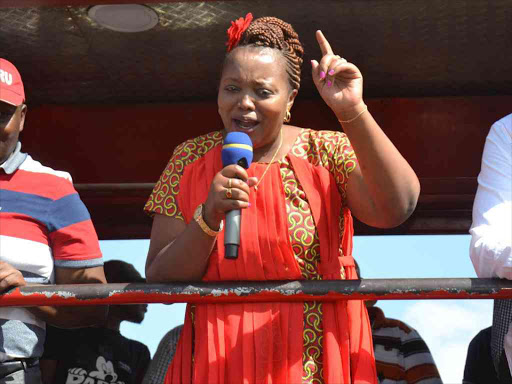 Some Nyeri women have decided to deny their husbands sex until they cast their ballots in the repeat race to State House.

They will hold out on October 25, the even of voting day, when Kenyans will choose again between President Uhuru Kenyatta and NASA chief Raila Odinga.

said they will only allow their men to enjoy sex if they participate in the election.

Rahab Mukami, who is Nyeri woman representative, noted they have intensified campaigns to give Uhuru a "big win".

Several politicians have asked women to deny their men their conjugal rights in the past, all for the sake of getting as many votes as possible for their candidates.

asked married supporters not to have sex a day before the August 8 general election.

Homa Bay residents that they should only have intercourse after results are announced.

He said in Dholuo that: "August 8 will be a historic day and no vote will be left without being cast. Men will sleep outside. When the day comes, no man should sleep with a woman."

The Opposition chief had said in June that "when you are going for war, sex is a bad omen".

Mukami lashed out at Roselyne Akombe for resigning as IEBC commissioner just days to the election.

"Her resignation was untimely. History will judge her harshly."

Akombe is a citizen of Kenya and the United States.

"I suspect she was among those who tampered with documents at the Supreme Court, leading to the nullification of results," she said.

The top court annulled the election that IEBC said Uhuru won in a historic decision on September 1.NASA has been pushing for reforms which have not been implemented, forcing Raila and his running mat Kalonzo Musyoka to withdraw from the poll.

Nyandarua women representative Faith Gitau called on the ODM leader to participate in the election.

Kiambu's Gathoni Muchomba said Raila could be inciting commissioners friendly to NASA to quit to ensure the poll does not take place.