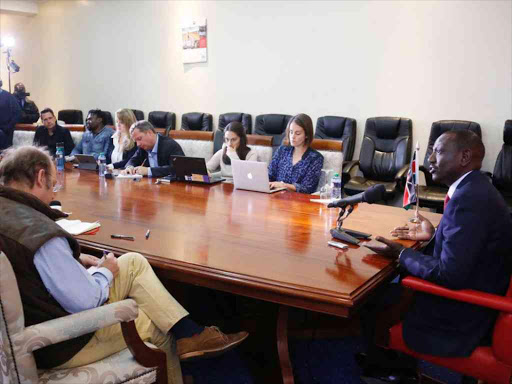 Ruto does not understand why NASA is still issuing demands on who should print ballot papers, the mode of result transmission and the appointment of election management officials.

"It seems NASA has not decided whether they are in the presidential race or not. If they have withdrawn, why are they giving conditions on how the elections should be held?"

The Deputy President said NASA leader Raila Odinga wanted to foment a crisis and appeal for foreign governments' intervention for the formation of a coalition government.

Ruto warned that negotiating a power-sharing agreement would render the constitution, which provides that elections are conducted, useless.

He told foreign correspondents in an interview at his Karen residence in Nairobi on Tuesday that Raila is employing excuses to run away from a humiliating defeat.

Ruto said he is sure Raila wanted to avoid an embarrassment as many in his strongholds have lost faith in the Opposition.

Addressing Foreign Correspondents of East Africa, the Deputy President said his move was also a strategy to allow him to run again in 2022 and throw his co-principals despite the promise that the will not vie again.

"In my honest opinion, Odinga is running away from humiliating defeat. He has to come up with excuses to justify his move. It is also a strategy because he wants to run again in 2022," Ruto said.

"Odinga is running away because he can't change the numbers and he knows that he can't win the October 26 election."

The Deputy President said Jubilee is taking issues to do with the election seriously and will not succumb to attempts by the Opposition to delegitimise the vote.

Ruto dismissed the perception of a crisis in Kenya, saying NASA has manufactured and created this because of it cant face Jubilee at the ballot.

"The Opposition leaders have manufactured and created a crisis because they can't ask legitimate Kenyans for their votes and are now creating chaotic situations to pave way for political solutions at the expense of democracy.

"They are doing whatever they can to create a situation, including making the country ungovernable, to achieve their political ends outside the constitution."

The DP termed NASA leaders political hypocrites who only believe democracy can only be with affairs going their way.

Ruto particularly took issue with the manner in which Raila criticised presidential candidate Ekuro Aukot after his successful bid for inclusion in the rerun.

"The other day NASA leaders were demanding that Aukot must participate in the repeat presidential election and now that his name is [there], they have turned against him, terming him a Jubilee project. Isn't this doublespeak?"

The Deputy President further said Jubilee has no problem with IEBC implementing conditions set by the Opposition as their interest is a credible vote.

"We have no problem with IEBC agreeing with our competitors on the minimum conditions or irreducible minimums. They can agree on a new supplier of ballot papers, issues of technology, sacking of [IEBC CEO Ezra] Chiloba...so long as it is within the constitution and Supreme Court ruling that elections be held in 60 days."

He said Kenya has a vibrant judiciary which will render its judgement if the laws are unconstitutional.

Ruto has assured Kenyans no one will be victimised for engaging in peaceful demonstrations.

He, however, warned that the government will not hesitate to take action against those who misuse the freedom of association to loot, destroy property and harm people including police.

Ruto noted IPOA is investigating claims police used excessive force on demonstrators in some parts of the country and that some civilians were armed.

"Police have the responsibility to protect Kenyans from looters, rioters and criminals."