Can Kenya become the South Korea of Africa? 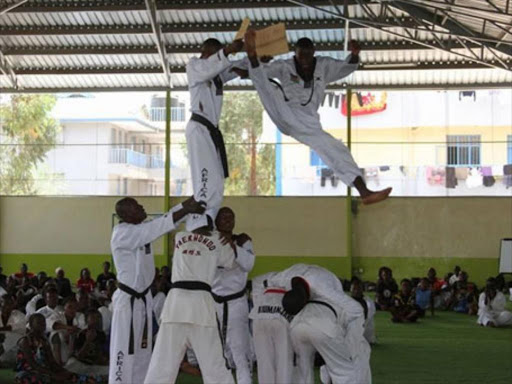 In 1953 South Korea emerged from the ravages of a debilitating war, yet the total gross domestic product in nominal terms has surged .

South Korea over the past four decades has demonstrated incredible economic growth and global integration to become a high-tech industrialized economy. In the 1960s, GDP per capita was comparable with levels in the poorer countries of Africa and Asia. In 2004, .

In South Korea the Gini coefficient is 0.30 (extent of inequality) whereas in Kenya it is much higher at 0.45. Despite posting some of the highest GDP growth rates globally, countries in Africa continue to have the worst poverty and unemployment rates, with Kenya being one of those countries where the gap between rich and poor is widening.

While the majority of these Kenyans are occupied in the agricultural industry, technology advances and the rising prominence of the service industry is threatening to render many of these superfluous unless urgent shifts in growth models are undertaken to create quality jobs.

Lessons from economic structural transformation abound especially from the Asian tigers. Once an agricultural country like Kenya, South Korea spent much of the 20th century driving modern technologies and is now regarded as one of Asia’s most advanced economies. Among the focus areas for the country were facilitating industrialization, high household savings rates, high literacy rates and low fertility rates.

What South Korea achieved was fast economic growth underpinned by a strong industrial base that led to full employment and higher real wages. When the 1997 financial crisis threatened employment and welfare of its citizens in 1997, the country engaged in ambitious structural adjustment that introduced social protection measures for workers, the unemployed and poor people, in addition to reigniting the drivers of growth.

The international experience suggests that, for a given increase in the labor force, GDP growth should be at least double that rate to prevent unemployment from rising, and even higher if unemployment is to be reduced. With Kenya’s labor force growing at 3 percent corresponding to one million youth entering the job market each year, GDP should keep growing at 6 percent.

But this may not be enough as there is a lot of slack in the labor market to be absorbed. Kenya has one of the highest informal sector employment rates in the continent. With about three out of four workers employed in casual jobs whose key features include unpredictable incomes, poor working conditions and low productivity.

Income inequality remains a challenge in Kenya, with the highest 10 percent earning almost 15 times higher than the lowest 10 percent, which is double of that in South Korea.

There are grounds for optimism, as Kenya seeks to move from being a regional leader to local innovator. In August 2016, Kenya hosted the Sixth Tokyo International Conference on African Development (TICAD), which was the first on African soil. Kenya is also developing policy and institutional reforms to increase export through better trade logistics and greater regional integration.

Kenya Bureau of Standards (KEBS) and Korean Agency for Technology and Standards (KATS) have signed a Memorandum of Understanding (MOU) to boost standardization activities between the two countries. /CITIZEN TV

In addition, Kenya’s internet prices are low at half of even lower than those in neighboring countries. Innovations in mobile phone-based banking and related technological platforms have resulted in more financial inclusion that has reached 75 percent of the population. A large population of educated youth is already employed in these areas that have high job creation potential.

Kenya’s policies will need to consider the effects of technological innovations on the labor market and their socioeconomic impact. Household incomes improve when the largest number of people get involved in technology-based productive work. Even agriculture needs to be high-tech and include agro-processing.

Underlying this is the ability of the education and training system to adapt and promote the creation of a sustainable and inclusive economy. Kenya’s policies will therefore need to assess the effects of technological innovations on the labor market and their socioeconomic impact.

Kenya is moving ahead on education with its more than 1000 post-secondary institutions, 22 public and more than 30 private universities that produce the largest numbers of highly trained and skilled persons in the East African Community.

However, Kenya has substantial disparities in access to education. According to the Kenya National Bureau of Statistics, children in capital city Nairobi have about 15 times more access to secondary education than those living in Turkana, one of the poorest counties.

In addition to education, that increases employability on the labor supply side but does not in itself create jobs, more emphasis should be given to policies that increase labor demand. With an increasing youthful population, Kenya faces a window of demographic opportunity not only numerically.

Today’s youth are more educated than their parents and are “waiting in the wings”, not yet active but ready and willing to do so. But for this to happen and thus reduce youth and educated unemployment, there is a need to ensure that there are enough opportunities for them to participate actively in the economy and society.

Unfortunately, about 43 percent of Kenya’s youth are currently either unemployed or working yet living in poverty. Not unrelated to the few employment opportunities at home, many job seekers emigrate. The International Organization of Migration (IOM) reports for Kenya a skilled emigration rate of 35 per cent reaching 51 percent among health professionals. These rates are among the highest in the world. A continued lack of decent work opportunities as a result of insufficient or misapplied investments can perpetuate, if not increase, emigration and lead to an erosion of the basic social contract underlying democratic societies.

Still within the area of labor markets, good governance is critical for linking employment growth to decent employment creation. A recent meeting on the Future of Work organized by the Ministry of Labour, the Kenya Federation of Employers and the Kenya Federation of Trade unions in collaboration with the International Labour Organization discussed the implications for the 4th industrial revolution and its impact on Kenya. The discussion confirmed that laws, policies and institutions can be improved through social dialogue that would also include the informal sector.

For women, access to family planning and maternal health services – as well as education for girls is the best bet for improved economic opportunity. Global data shows that the highest benefits from reducing unintended pregnancies would accrue to the poorest countries, with

There are few interventions that would give as wide-reaching impacts.

Finally, Kenya would need to address the rural/urban divide. Urban population growth is naturally fueled from growth in the population already living in cities but in Kenya, more than in many other African countries, urban growth comes from significant internal migration. This suggests that the country side is becoming increasingly less attractive. The share of population living in slums remains high at 55 percent with no discernible decline since 1990.

In conclusion, increases in real wages and decent employment creation will remain elusive as long as growth is not inclusive while educated job seekers are not employed in sectors that require new skills. The shifting population of Kenya provides many opportunities for growth. With a median age of 18, investing in Kenya’s youth would reap a demographic dividend. These would help accelerate Kenya’ march to prosperity and help end poverty.

When this happens, Kenya will increase its ability to introduce more comprehensive and effective social protection policies that would add to the income security provided by decent employment. And unlike South Korea, Kenya should not wait to do so after a financial crisis.

Dr Mary Kawar is Country Director of the ILO for Tanzania, Kenya, Uganda, Rwanda and Burundi. Follow her on twitter:

Post a comment
WATCH: The latest videos from the Star
by Dr Mary Kawar and Siddharth Chatterjee
News
16 October 2017 - 09:00
Read The E-Paper