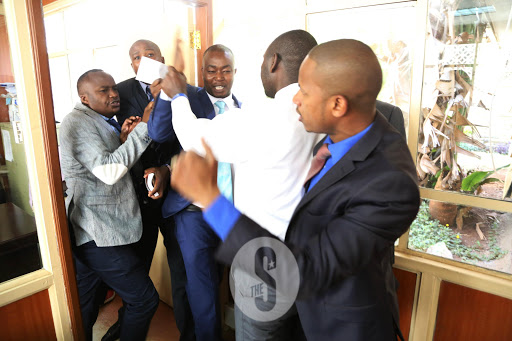 It is not clear why the Starehe and Embakasi East MPs resorted to blows but journalists at the centre said Njagua followed Babu after he walked in.

They said he had been chatting with them when his counterpart grabbed him from the back and started pulling him while yelling.

It was then that a confrontation ensued.

"We heard Jaguar shouting 'you cannot do that to the President. He is not a caretaker President'," one of the journalists said.

The two newly elected MPs are being held in the chambers.

He was charged with subversion, insulting Uhuru and incitement to violence.

He spent two nights in police cells and was eventually released on Sh200,000 cash bail.

Post a comment
WATCH: The latest videos from the Star
by By GIDEON KETER AND PATRICK VIDIJA
News
10 October 2017 - 15:00
Read The E-Paper