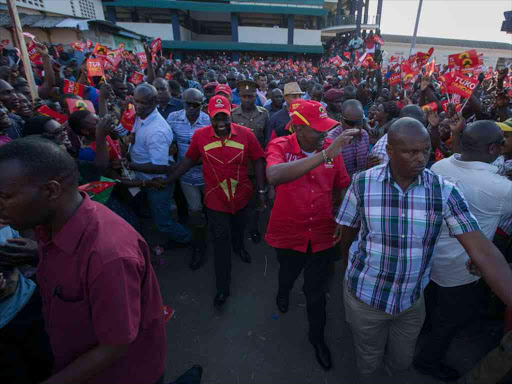 Traders at Mombasa’s Kongowea market will only pay for services offered so their taxes do not go to waste, the President has directed.

Uhuru Kenyatta gave the order on Monday in an address to traders at the market in Hassan Joho's county.

"There is no need for the county government to continue taxing the trader yet they it does not provide the services they have paid for," he said.

He added the government

has launched investigations to establish claims traders at the market are not served despite paying taxes.

Action will be taken immediately against those who failed to deliver, he said, and warned police against harassing residents who do not pay for services not offered.

"We cannot allow the people to suffer in the hands of some few individuals. Wananchi should only pay for services offered to them."

The President said the new market was built by the national government at a cost of Sh500 million and that the National Youth Service will start cleaning it next week.

Regarding NASA leader Raila Odinga, Uhuru and DP William Ruto said Kenyans will vote on October 26 whether he participates or not.

Opposition leaders are scared of the poll as they have sensed defeat, Uhuru said, claiming they are scheming a delay for another three months for for selfish gains.

inciting Kenyans through demonstrations, "to cause confusion with the hope of getting into power through the backdoor".

Jubilee is ready to face NASA at the ballot and that he will not permit a postponement.

"The Opposition should stop sideshows and prepare for the next election. Kenyans want to move away from elections to concentrate on development activities."

the mass exodus from NASA since the August 8 poll has shaken the Opposition, forcing its leaders to interfere with the vote.

"We are tired of their rhetoric and stories...the country wants to move on. We must conclude election on October 26. If those in Opposition are not ready, they should retire from politics," he said.

"We know their games and we have said enough is enough. There will be no postponement. Odinga should retire and honorably go home."

Uhuru and the DP further told Raila to retire from politics if he is not ready for the repeat election that arose from his petition at the Supreme Court.

Ruto said Opposition leaders are opposed to the elections because they know Raila will not win.

Balala and Sonko urged Coast residents to vote for Uhuru in large numbers on election day.

"It is time for us to move away from politics of propaganda and support Jubilee that is committed to improving our lives," said Sonko.

In an address at Okoa Kenya's office in Nairobi on Monday, Raila downplayed defections saying many will drop the pursuit on the way to 'Canaan'.

He said the coalition is still strong and that their resolve for a better Kenya remains.

Coast leaders, some who met Uhuru at Serani grounds in Mombasa on Tuesday, assured they will deliver at least 700,000 votes.