Raila off to UK, US ahead of poll 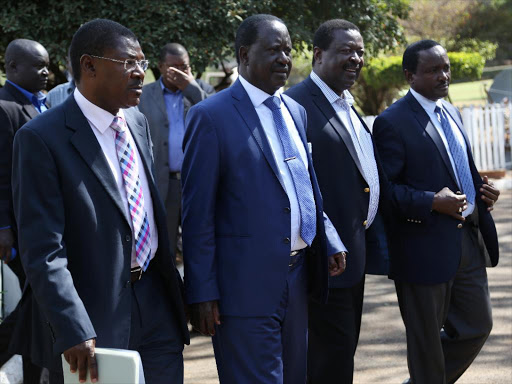 A decision by Opposition leader Raila Odinga to fly out of the country just days to repeat presidential election has caused panic in Jubilee.

Some of President Uhuru Kenyatta’s handlers fear that the NASA leader may not return before Election Day, October 26.

It is unclear how long Raila will be out of the country, which countries he is scheduled to visit and the reasons for his visits. His spokesman Dennis Onyango confirmed yesterday the former Prime Minister will be heading to the United Kingdom.

Jubilee leaders, however, fear that the NASA presidential candidate may not return to participate in the election and therefore cause a political and constitutional crisis.

Yesterday the Star learnt that the Opposition has launched a diplomatic push against US Ambassador to Kenya Robert Godec, for allegedly misadvising Washington on Kenya’s political realities.

The behind-the-scenes intrigues emerged as Raila prepares to jet out to London for a series of high- profile engagements, including giving a lecture at the the Royal Institute of International Affairs, commonly known as Chatham House.

The Royal Institute’s mission is to analyse and promote the understanding of major international issues and current affairs.

Raila was also scheduled to travel to the US for a string of engagements, including with senior State Department officials, but this trip appears to have been put on hold.

“Yes, he will travel to the UK anytime this week,” Onyango told the Star yesterday.

By Friday, at least six institutions had confirmed scheduled meetings with Raila in the US.

These include the Center for Strategic and International Studies, the Council for Foreign Relations, a number of senior officials at the United Nations and State Department as well as the National Security Council.

He was also to meet a section of US congressman and senators.

The diplomatic charm offensive comes as NASA intensifies its anti-repeat election crusade with only 16 days to the vote.

NASA plans to heighten demonstrations across the country from two days to three days a week – Monday, Wednesday and Friday.

Kisumu Senator Anyang’ Nyong’o, a key Raila ally, has been in the US for weeks and part of his brief is to “set the record straight” on Kenya's political landscape.

A former high-flying diplomat in the Grand Coalition Government of 2008-2013 has also been engaged to help court diplomats and convey the NASA narrative.

“Godec is not giving honest communication to Washington. The brief that the American government is receiving is purely a Jubilee narrative,” a source within the Opposition told the Star.

Western envoys in Kenya, including Godec, have always maintained that they are neutral.

“We are neutral and have no agenda other than to help ensure the Kenyan people have a successful election. We do not support any party, any candidate, or any outcome. We did not back any politician in the August 8 election, and we will not for this poll either,” Godec and EU ambassadors and High Commissioners said last week.

The Jubilee-championed amendments to the Election Laws, which the Donald Trump administration has criticised, have given NASA the gusto to press on.

Sources said Nyongo's engagement with State Department officials and influential US academics and policy think tanks was responsible for a statement released by the Trump administration on Friday.

In the statement, Washington said they remain committed to supporting the repeat presidential polls under the “current laws”.

“We remain committed to supporting a free, fair, and credible election that is consistent with Kenya's Constitution, current laws, and institutions, and we do not back any party or candidate,” State Department Spokesman Heather Nauert said.

“Changing electoral laws without broad agreement just prior to a poll is not consistent with international best practice, increases political tension, and undermines public perceptions of the integrity of the electoral process.”

Nauert however censored politicians for what she termed as baseless and unreasonable demands on the IEBC.

“We are not going to be blackmailed. We are not very enthusiastic about going to the United States of America. The diplomat has overstepped his mandate, our sovereignty cannot be surrendered to anyone,” Orengo said.

“We are taken aback by utterances by the Diplomatic Community. They too have issues from their mother countries to deal with. America also has its own problems.”

NASA believes Jubilee is advantaged in influencing the Western position in Kenya.

The government has previously used the Podesta Group, an influential Washington lobbying firm, to advocate for the country’s interests with US policymakers and to improve Kenya’s image.

Raila's overseas charm offensive two weeks to the election confirms that the former PM could make good his threats to boycott the polls.

There have been claims that in 2007, US Ambassador Michael Ranneberger secretly supported then President Mwai Kibaki.

In an article titled, “The debacle of 2007: How Kenyan Politics Was Frozen and an Election Stolen with US Connivance”, Flottman says that Ranneberger urged Kenyans to accept the disputed results announced by the now-defunct ECK.

“Ranneberger in Nairobi made no disclosure [of discrepancies] of what he had witnessed but encouraged Kenyans to accept the results announced by the ECK that Sunday and formal congratulations were issued from a State Department spokesman back in the US,” he wrote.

“European foreign ministries and diplomats in the meantime criticized what was obviously a highly irregular process, with the suspect tallies and the hurried, secretive swearing-in of Kibaki. On Monday, the State Department changed position through its main spokesman in Washington, saying that ‘we are not congratulating anyone’.”