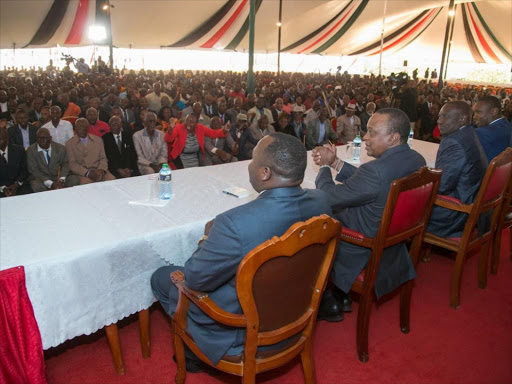 The President, who has rolled out a vigorous campaign blitz for a second term will campaign in Ekerenyo, a few kilometres from Magara's native backyard.

The tour of the Gusii region is a culmination of a series of consultative meetings which he has held in recent weeks with opinion leaders and influential leaders.

It comes a day after NASA leader Raila Odinga hosted leaders from the region at the Okoa Kenya secretariat in Nairobi.

The leaders pledged to mop up the region's vote for the ODM leader and downplayed Jubilee's forays.

He told the leaders his criticism of the Supreme Court ruling showed he is human and should not be misconstrued to mean he hates the Gusii community.

The rounds of meetings have s been aimed at assuaging the ferocious backlash that followed his attack at the Chief Justice.

After the Supreme Court annulled his August 8 win, the president went on the vicious attack at the apex court calling the six-judge bench "crooks".

The attack was seen as an assault on the judiciary's independence with critics heavily accusing the President of engaging in a personalised onslaught against the CJ.

He immediately hit the campaign trail in Kisii and Nyamira counties accusing Uhuru of targeting the Chief Justice.

"We are ready to receive him with open hands, the ground has shifted...let the doubting Thomases be warned. We will deliver for Jubilee just as we did in August," the former Senator said.

"The president has made his commitment to include the community in his development agenda, he has shown the capacity and we are ready to give him votes to accomplish that."

The President is expected to land at Ekerenyo before heading to Gesima in Kitutu Masaba constituency - the home turf of his fiercest critic and ODM Treasurer Timothy Bosire.

In the afternoon, Uhuru will head to Obure's bedrock of Sameta in Bobasi Constituency for a rally.

He will then leave for Marani in Kitutu Chache North, that is represented by National Assembly deputy majority leader Jimmy Angwenyi (Jubilee).

The area is also the home of Kisii Governor James Ongwae who was re-elected on an ODM ticket.

"Nyamira is now a Jubilee zone and on October 26, we are targeting 70 per cent vote, up from the 54 per cent the President got on August 8," Nyamoko told The Star.

He downplayed the President's criticism of Maraga saying it was an "emotional expression".

Tong’i said the Jubilee team in Kisii county has been boosted by some elected MPs who have shown interest in supporting Uhuru's re-election bid.

"MPs who were elected as independents and on small parties have joined us to campaign for the President."

Uhuru is expected to receive former West Mugirango MP James Gesami who ran for Nyamira governor as an independent but lost to ODM's John Nyagarama.

Post a comment
WATCH: The latest videos from the Star
by JAMES MBAKA and ANGWENYI GICHANA @TheStarKenya
News
04 October 2017 - 12:00
Read The E-Paper