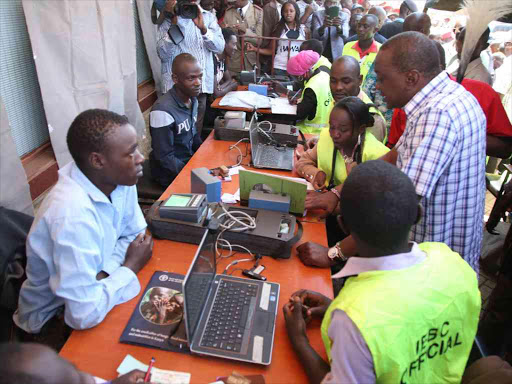 A file photo of President Uhuru Kenyatta and Jubilee Party leaders during a voter registration drive in Meru county.

Kenya’s will soon be re-run, but the long-term questions they raised about election management are still unanswered. The spotlight is on the work of international observer teams, but there are also much wider questions of electoral capacity – problems that extend to the top of the African Union, and thence across the whole continent.

African democracies are in the process of co-ordinating a generation jump in applied technology. So far, they have actually done a remarkable job by global standards. After all, something like electronic voting is still not used in the UK, where people in raincoats wait patiently while someone with a pencil draws a line through their name on a paper spreadsheet. The rain-sodden voter drips into the polling booth and makes a choice, casts their vote with a pencil on a sheet of paper, and shuffles outside again while putting up an ineffectual umbrella. Nothing has changed for 100 years.

It’s Africa that has led the way – and the West isn’t the place to look for immediate answers for all the problems of running a 21st-century election. One such problem is the use of multiple forms of electronic voting. Voter identification by electronic means is given priority in Nigeria, but even there, it’s not implemented consistently: there are different systems provided by different companies, all submitting tenders on a competitive basis.

The African Union needs to devise a standard set of requirements and attributes for electronic voting across the continent. It’s no longer enough to have a protocol that says paper votes have to be placed into clear plastic ballot boxes. But the African Union has fallen behind. Its previous head, Nkosazana Dlamini-Zuma, was hardly technologically minded; in fact, her successor has apparently stressed the commission urgently needs an email system fit for purpose.

Dlamini-Zuma has now returned to of her home country, South Africa, whose cabinet is renowned for its technological illiteracy. There are very few images of its current president, Jacob Zuma, working on a laptop or PC, and possibly none of him actually pressing the keys. (His next door neighbour, Zimbabwe’s Robert Mugabe, has seemingly never been pictured with a laptop at all.)

But if the presidents might have trouble sending simple emails, the thousands of local observers at each election will need special training of the sort never attempted before. They need to know not just how the system works, but how it can be made not to work – or at least, to work in ways that do not reflect the electorate’s will. Only after that does the question of international observer capacity come into play.

It’s fair to say that although EU observers to Kenya were deployed far in advance of the election and had good geographical coverage, the team was not replete with electronic expertise. And it’s not as if there was no advance knowledge that this would be an electronic election.

Well before the elections began and before the EU observer team was deployed, senior members of both the EU team and the Kenyan opposition were given access to a I prepared on the problems of electronic observation. And there was ample evidence from the 2015 Nigerian elections that these things could be . To be fair, electoral commissions need to upgrade their capacities as well; whatever happened in Kenya, whether wicked or incompetent, it was clear electoral officials were not on top of their game, unlike their Nigerian counterparts, who managed to resolve their problems in the end.

Electoral commissions need to open up all stages of the electronic process to knowledgeable observers, and especially the verification stage. This is where subtle algorithmic adjustments can be inserted to preserve close parity between voting patterns on the ground and “verified” results that “just” deliver very narrow victories to a ruling party.

At least electronic cheating can only really work persuasively in close elections. The days of 90% victories are almost (if not quite) over, but they will be followed a rash of elections “won” by about 2%. Margins of about 4%, as in the Kenyan elections, will have to be open to expert interrogation. As it turned out, Kenya’s elections were annulled on grounds of non-electronic irregularities, but neither the opposition nor the electoral commission seemed able to make sustained cases for or against electronic abuse.

Still, it is Africa that has come almost of age in electronic and digital voting. The West’s elections look like Sony Walkmans in the age of the smartphone. Even that comparison might be a bit flattering: in the UK, going to vote is like . Let’s hope Africa’s new leaders and technocrats will make the generational jump more smoothly in the future, and keep showing the creaky old West the way.