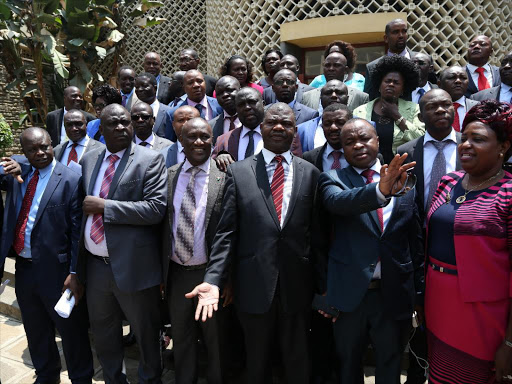 NASA MPs after they walked out of parliament chambers September 28,2017 protesting the passing of the publication of the Bill on amendments to Elections Laws to be reduced from 14 days to one day./HEZRON NJOROGE

They created a storm in Parliament and were denounced by the opposition.

The amendments have further poisoned the already tense and toxic political environment — with only 27 days to presidential rerun.

The changes also will slash the powers of the Judiciary and the IEBC chairman.

The Supreme Court, which nullified President Uhuru Kenyatta's win, says it will not hesitate to do the same on October 26 if the poll

again violates the Constitution and other laws.The vote was 4-2.

So Jubilee is moving fast to put restrictions in place to tie the Judiciary's hands and limit its independence before the poll.

A date for the vote has not been set and Parliament adjourned yesterday, however, the legislation will sail through because of Jubilee's tyranny of numbers.

Opposition leaders refused to continue talks with Jubilee convened by the IEBC at Bomas, to protest against the amendments Bill tabled in the House by Majority Leader Aden Duale.

James Orengo yesterday said the opposition will take the battle to the people, adding Jubilee "will be responsible for whatever will happen thereafter".

Jubilee rejected NASA's claims, saying the proposed legislation is only meant to close loopholes and remove ambiguities raised by the apex court when it overturned Kenyatta's election.

Uhuru will today and tomorrow hold rallies in Western where he will defend the amendments and court the Luhya vote.

He will be in Busia and Bungoma today and go to Kakamega tomorrow after meeting community elders at the Kakamega State Lodge. He will then hold a rally in Mumias before attending the homecoming of Mumias MP Ben Washiali, Chief Whip in the House.

Under the new law, the IEBC vice chairman would take over the roles of chairman if the chairman is absent for any reason.

This means that despite the turf wars rocking the commission, vice chair Connie Maina would be able to declare the next President after the October 26 rerun should Chairman Wafula Chebukati be unavailable.

Jubilee also wants numbers to be king and conduct of elections largely irrelevant in determining a presidential petition at the Supreme Court.

After the Bill passes, a petitioner will have to prove to the court that violations of the Constitution or any electoral law significantly alter the presidential outcome, as declared.

Anomalies in statutory forms such as missing security features would also be irrelevant.

According to the proposed amendments to the IEBC Act 2012, in the absence of the chair and the vice chair, the remaining five commissioners shall elect an acting chairperson.

shall be appointed,” the Bill states.

The amendments come at a time when IEBC commissioners are bitterly divided.

On one side, Vice Chairman Consolata Maina and commissioners Abdi Guliye, Paul Kurgat and Boya Molu have fiercely opposed changes sought by Chebukati — notably his planned purge after the Supreme Court ruling.

The Chairman is backed by Roselyne Akombe and Margaret Mwachanya.

Chebukati's explosive memos to CEO Ezra Chiloba — in which he admitted the nullified poll was deeply flawed — has embarrassed Jubilee, which has argued any errors were minor and inadvertent.

With talks that never got off the ground and the straitjacket amendments, the political temperatures soared.

He called for massive countrywide demonstrations every Monday and Friday.

Speaking to the press, Chebukati also said the IEBC does not need any amendments to the Elections Act to deliver a free and fair polls.

“The problems which we were faulted on by the Supreme Court were not for lack of law. As we speak, we do not need any law for purposes the October 26 election," Chebukati said.

Jubilee wants to do away with the requirement that the IEBC chairman must be a distinguished lawyer.

Today the chairperson must be a lawyer, qualified to be a judge of the Supreme Court. Chebukati is the only IEBC commissioner who is a lawyer.

One amendment says anyone with a degree in public administration, public finance, governance, electoral management, social sciences or law would be illegible to be chairman.

In what will heighten wars at the IEBC, the quorum of any meeting will be reduced from five to three.

“Unless a unanimous decision is reached, a decision of any matter shall be by majority of the members present and voting,” the Bill states.

The Bill would make transmission of results manual, not electronic, making rigging easier, the opposition says.

According to the Bill, the IEBC will transmit results both electronically and manually to

Where there are discrepancies between the electronically and manually transmitted results, manual will prevail.

Kenyatta's reelection was nullified on, among other issues, irregularities in results transmission.

results in an electronic format [and] shall not invalidate the results as announced and declared by returning officers at polling stations and constituency tallying centres,” the Bill states.

In the Bill, Jubilee also proposes the IEBC put in place complementary system for identification of voters, other than electronic.

Jubilee seeks to amend Section 83 that the Supreme Court judges relied on to nullify presidential results.

A petition would have to prove violations of the Constitution or any electoral law significantly alter the outcome, as declared by the IEBC.

This was proposed by Justice Njoki Ndungu in her 440-page dissenting opinion. She said he majority wrongly lowered the standard for nullification of presidential polls.

She said the interpretation of Section 83 of the Elections Act by the majority will unleash “jurisprudential confusion never before witnessed”.

Elections are not events, but processes, they said.