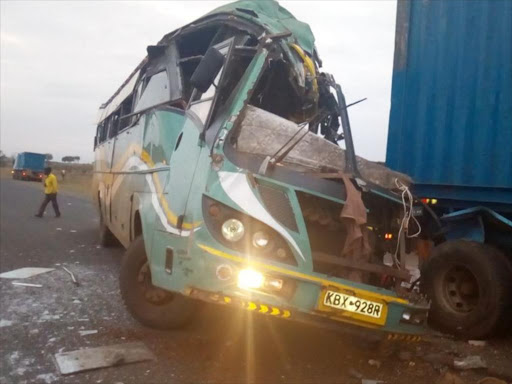 The wreckage of the passenger bus which was involved in an accident at Satelite area on Narok-Mai Mahiu highway, Sunday September 10, 2017. /COURTESY

Three people on Sunday died in an accident involving a bus and a truck at Satellite area on Narok-Mai Mahiu highway.

The bus, which was on its way from Kisii to Nairobi, was reportedly speeding at the time of the accident.

The 62-passenger vehicle hit the trailer from the rear, ostensibly as the driver attempted to overtake.

Police say ten other passengers were injured and were rushed to Kijabe hospital for treatment.

The police raised fears the death toll may rise because some casualties were in serious condition.

On Wednesday, 11 people died in an accident involving three vehicles on Thika Road.

Several others were admitted to various hospitals with serious injuries.

Kalembe Ndile also fractured his leg after his car crushed on an oncoming truck on Mombasa Road, Saturday.

He was rushed to hospital where he is still receiving treatment.