Audit report on IEBC servers: login trails, forms 34A, B not provided 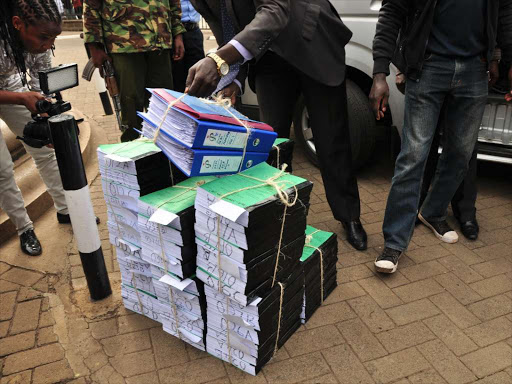 Forms 34 A,B and C which were filed at the Supreme court by IEBC on Tuesday,August 22, 2017. /COLLINS KWEYU

Supreme Court judges on Monday ordered the IEBC to grant the National Super Alliance access to its servers.

The coalition, following a petition by its leader Raila Odinga, wanted this for verification of information used to declare results of the August 8 poll.

Raila is challenging the declaration of President Uhuru Kenyatta as the winner of the presidential election.

It was also to include certified copies of key result collation statutory records, popularly known as forms 34A and 34B.

The report on the audit by IT experts appointed by the court was to be tabled before the court on Tuesday, August 29 latest 5pm.

However, technicalities attributed to “layers of security levels in accessing the servers" by IEBC lawyers saw the report being tabled at 9pm.

Here is what the IT experts found in the study as well as what was complied with or not:

IEBC complied with the order to provide NASA with information on the number of servers in its possession.

The commission, however, refused to grant access to firewalls saying this would compromise the security of its system.

It only provided schematic diagram and hardware model.

"Document provided complies with the requirement," the report said.

Copies of certificates of penetration tests conducted on the Election Technology System before and during the August 8 election were also provided.

The report however said the reports on the tests conducted were not certified by the electoral body pursuant to Regulation 10 of the Elections Technology Regulations.

The report said IEBC provided only the GPS location of polling stations but not for the KIEMS kits.

NASA had wanted the location of the Kenya Integrated Elections Management Kits for the period between August 5 and August 11.

The report said IEBC was to provide the correct report.

It added that a certified list of all the KIEMS kits procured and used on Election Day was provided.

It however said the report on deployment or non-deployment of the kits was not comprehensive.

The experts however said IEBC refused to provide a list of APIs used form exchange of data with the partners.

API stands for application program interface. It is a set of routines, protocols, and tools for building software applications.

Basically, an API specifies how software components should interact.

The report said IEBC failed to comply. It said the commission provided only softcopy logs to NASA who on their part insisted on the logs being accessed as they watched.

The report said IEBC stood its ground saying as long as the softcopies were provided, they served the purpose.

"Live access was provided on August 29 at about 3:50pm without the ability to access the logs or even view them. Therefore, the request was not granted, the IT experts said.

Similar, the report said IEBC refused to comply with an order to provide log in trails into KIEMS Database Management System but provided softcopy logs.

On the access of the above documents, the report said: "All parties were in agreement that this order was not to be handled by this team."

This order covered the provision of certified copies of all forms 34A from all the 40,833 polling stations, forms 34B from all the 291 tallying centres and form 34C used to announce the final presidential result.

The report presented by Supreme Court Registrar Esther Nyaiyaki said IEBC refused to provide scanned and transmitted forms 34A and 34B to NASA.

The petitioner and the two respondents, IEBC and Uhuru, were each given 15 minutes to respond to the findings in the report.

NASA’s lead counsel James Orengo said that some of the forms 34A and 34B did not have security features.

He said some forms lacked water marks and serial numbers and some appeared to be carbon copies of the original forms.

Orengo said the revelations were enough grounds for the court to nullify Uhuru's re-election.

"My lords, these documents support our case," he said.

In response, IEBC lawyer Paul Muite said the security features were not a legal requirement but a feature introduced by Al Ghurair, the Dubai-based firm contracted to print the ballot papers.

“There is no requirement in the regulations regarding security features…it is not a requirement of the law,” Muite said when pressed further by Maraga.

The The court retreated on Tuesday after all parties responded to the report.

CJ said the seven-judge bench will issue its verdict on the presidential petition on Friday, September 1.

Post a comment
WATCH: The latest videos from the Star
by EMMANUEL WANJALA @RambsNabiswa
News
30 August 2017 - 18:00
Read The E-Paper