Laikipia leaders resolve to end invasions to 'save county face' 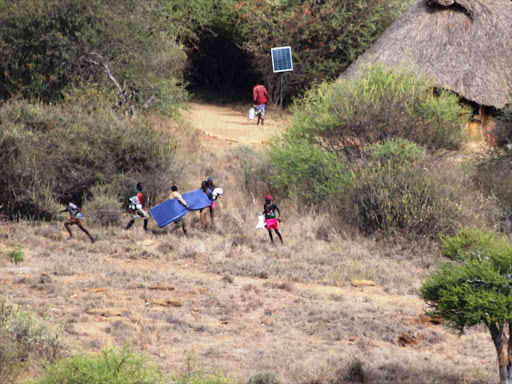 Pastoralists carry away goods looted from Suyian lodge in Laikipia county following an invasion on January 30, 2017. /THE STAR

have adversely tainted the county's image.

For months now, the county has faced many cases of cattle rustling and invasion of private ranches by herders from neighbouring counties.

The attacks have left several people dead and many injured.

The leaders said they will prudently manage public resources to end conflicts affecting ranches and businesses.

In a joint communique read at the end of a two-day retreat in Naivasha, the lot said they deal with insecurity issues in the area.

Governor Ndiritu Muriithi's brainchild while the meeting was organised by the

Office of the President and the National Cohesion and Integration Commission.

hailed the leader's commitment to ensuring the county's untapped potential is exploited.

"I feel excited by the conversations we have had here. Let us now move with a common purpose to make Laikipia a far better place with good quality of life," he said on Sunday.

Ex-Foreign Affairs PS Thuita Mwangi noted residents have spoken up about how their resources should be managed.

"This meeting was necessitated by the need to break from past mistakes. Let those seeking positions use them for the good of the people," he said.

The meeting followed intense lobbying for the county's speaker seat amid interests by various groups of leaders in the county.

Mariru said the meeting, which came before leaders assume office, set a tempo they are ready to maintain.

He noted leaders have realised they have a common agenda and should work together to improve the people's lives.