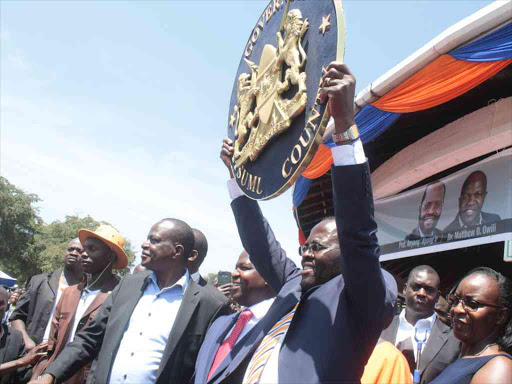 The swearing in of newly-elected governors was disrupted by residents in Laikipia and Kisumu as they booed their respective county commissioners.

Residents chanted "Kiunjuri must go" despite pleas from Governor Ndiritu Muriithi for them to listen to the address.

"Let the people of Laikipia conduct their affairs according to their will," Waruguru said.

Kiunjuri recently came under fire from governors who rejected the Devolution ministry's plan on county bosses assumption of office.

Judge Alfred Mabea swore Muriithi in at an event attended by various county and national leaders.

Among them was outgoing Governor Joshua Irungu, NCIC chair Francis ole Kaparo, and Stephano Dejack of the EU observer delegation.

Kisumu county commissioner Mohammed Maalim was booed off the stage during the swearing-in ceremony of Governor Anyang' Nyong'o.

The hostile crowd hurled objects at Maalim as he read Kiunjuri's speech. They appeared angered by alleged police brutality during post-election protests.

"We don’t want you. Go, go away … we are not happy with what happened in Kisumu,” some shouted.

Others asked Maalim to take full responsibility for the actions of police.

Nyong’o said six people were sexually abused and 171 others tortured during Kisumu protests over the election.

The Governor said his administration is working human right defenders to ensure the victims get justice.

"Four of the sexual abuse cases were in Nyalenda and two in Manyatta estates. Women were raped and some police officers engaged in looting,” he said.

Seven people died including six-month-old baby Samantha Pendo who was clobbered by police.

Pendo went to a coma for three days before she succumb to severe head injuries that left her with fractures according to postmortem report.

“Four people are still missing. Nobody knows their whereabouts even their families. Their bodies are not at any of the hospitals in the county.”

But earlier on Monday, the county security team led by Maalim absolved police over the alleged brutality.

In a press briefing, they security chiefs said only two deaths have been confirmed and dismissed as rumours reports in the media that seven people were killed allegedly by the police.