Eight dead after matatu crashes into lorry in Meru 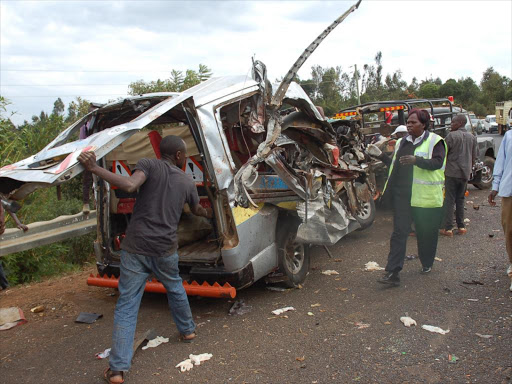 The wrekage of a matatu after an accident that killed eight people in Ngonyi area, Meru county on Saturday. /DENNIS DIBONDO

Eight people died on Saturday after a matatu crashed into a lorry in Meru.

Two others were injured in the accident after the matatu driver lost control while trying to overtake a boda boda.

Red Cross Central and Eastern boss Gitonga Mugambi said the matatu was heading to a dowry presentation ceremony in Chuka.

"They had hired two matatus to attens the ceremony but unfortunately for involved in an accident," he told The Star on phone.

Police had a difficult time removing the wreckage to clear the traffic jam.