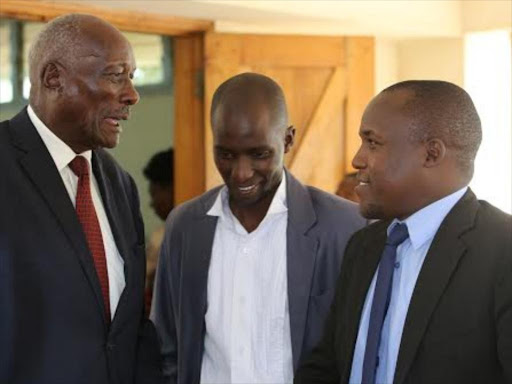 Eldoret politician Jackson Kibor has accused his second wife of using delay tactics to prolong their marriage, after their divorce case was adjourned for the 12th time on Friday.

Kibor is seeking to end his 51-year marriage to Josephine Jepkoech.

He accused her of desertion, cruelty and interfering with his 800-acre property in Kipkabus, Uasin Gishu county.

Through lawyers Mark Waziri and Richard Wainaina, Kibor said he is fed up with the unnecessary adjournments.

"We have reason to believe that they are not in court again as part of the delay tactics they are using to ensure that this matter does not conclude as soon as possible," Waziri said.

He said hearing dates are always agreed on by both parties, but Josephine and her lawyers keep seeking adjournments on flimsy grounds.

Waziri said Kibor, as a senior citizen, has always attended court as required because he wants the matter concluded.

He asked chief magistrate Charles Obulutsa to end hearings and give a determination.

The court was however informed that Josephine's lawyer Amos Magut has lost his grandmother and count not attend proceedings.

Lawyer Fortunas Mwaka, who stood in for Magut, pleaded for a final adjournment of the case.

But Waziri accused Magut of taking the matter lightly by failing to inform the court about his absence.

The magistrate granted the adjournment and issued a warning that it would be the final one.

The matter continue on July 26, when Josephine is expected to conclude her testimony.

The court will also hear from one of her daughters who is opposing the divorce.

Kibor has denied that he wants to divorce his wife because she placed a caveat on a 200-acre piece of land that he wanted to sell.

"I have said I don't want her because she travelled to Canada to live with her children, severally abandoning me and without my authority," he told the court.

In affidavits, Kibor said he has not been with Josephine for more than 30 years. The two were issued a marriage certificate in 1965.