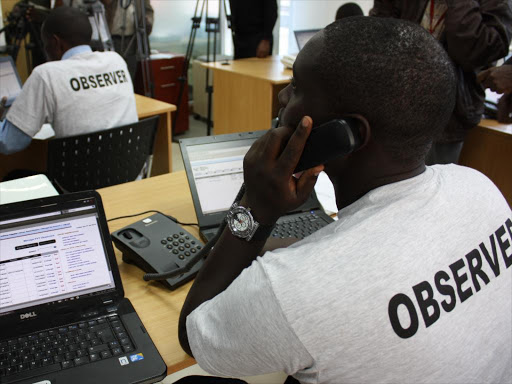 Election Observer Group officials during a past poll. /FILE

Election Observation Group wants clarifications from the IEBC on those who made it to the audited voters' roll.

This comes amid concerns and public pressure for the commission to explain anomalies reported on the audited voter's register.

Some of the questions are on data of dead people and queries on SMS checks on registration status.

This is despite voter verification and the KPMG audit which was expected to clean up the database to weed out ghost voters.

ELOG, in their election state of preparedness report, sought explanations on what happened to 2,610 voters who registered with both IDs and passports.

The lot also want an explanation on the fate of the 264,242 entries of either duplicate IDs or passports as well as those with 'out of range' details.

The IEBC said 171,476 entries that had invalid IDs were retained to avoid disefranchising affected voters.

"Of concern to us is how many voters, out of 17,523 whose details could not be found in the data, were included in the register," Regina Opondo said.

The ELOG steering committee chair said issues emanating from the voters list by KPMG, and voter verification, remain controversial in the public domain and must be clarified.

Josephine Mongare, the groups co-convener, said they want IEBC to address contraventions of the Election Act.

She said this was seen in open voter bribery in form of distribution of money, food and services by major political parties and candidates.

"Public officials often campaign in violation of the Act. Cases were reported recently in parts of Mathira, Othaya, and Tetu constituencies," Mongare said.

"Chiefs and their assistants have been linked with campaigning for Jubilee Party."

The observers also asked IEBC to deal with violent attacks meted on aspirants and their supporters in the campaign trail.

The May-June report also highlighted incidents of vandalism of campaign materials and hate speech during campaigns.