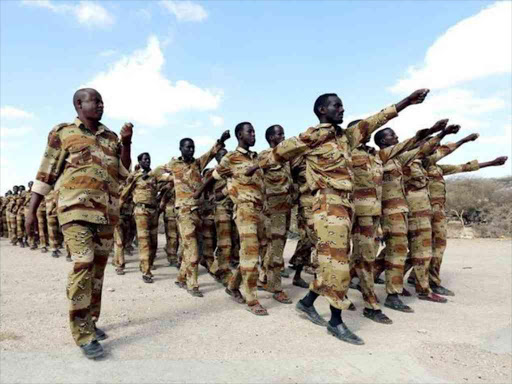 Somalia government soldiers from section 21 take part in a military exercise at their temporary camp in Dusamareeb, in this March 17, 2014 file photo. /REUTERS

Somalia's insurgency suffered a significant split after government officials confirmed on Friday that they had sent troops to repel fighters seeking to capture one of their own commanders.

The US had offered a $5 million reward for the capture of Mukhtar Robow, known universally as 'Robow', once the spokesman and deputy leader of al Shabaab, an insurgency that wants to overthrow Somalia's weak UN-backed government.

Robow fell out of favour with the insurgency in 2013 yet remained outwardly loyal. Earlier this month, the US quietly removed him from their list of sponsors of terror after five years.

"There was and is, negotiation going on between Robow and the Somali federal government but still there is no guarantee that he will defect," Colonel Aden Ahmed, an officer in the national military, told Reuters on Friday from southwestern Hudur town, near Robow's stronghold.

A split would further weaken al Shabaab following years where the insurgency has steadily lost ground. It withdrew from the capital in 2011 and has lost control of most of the major towns in south-central Somalia since.

and is mounting increasingly large and deadly bombings in the capital.

If Robow defects, it would give pro-government forces more freedom to operate in the regions of Bay and Bakool, slicing al Shabaab's operational territory in two. Robow is from the large Rahanweyn clan, which dominates many of Somalia's most fertile areas.

"We understand al Shabaab fighters plan to attack and capture Robow but this will not be easy for he has well-trained and well-armed...fighters who will die for him. Yesterday, we prepared about 300 military soldiers with military cars to defend Robow," Ahmed said.

"Those troops are now in the outskirts of the town. We cannot send them directly for many reasons. Al Shabaab may ambush us, Robow himself may ambush our forces. We shall give reinforcement to Robow only after we confirm that fighting between al Shabaab and Robow breaks out."

Residents said Robow was holed up in a village with about 400 fighters about 18 km (11 miles) from Hudur, the capital of Bakool region in southern Somalia.

Two residents said they saw two helicopters and a drone but it was unclear to them if the aircraft were connected to Robow.

"We understand al Shabaab decided to disarm Robow after they heard he was removed from US wanted list," local elder Mohamed Nur said.

Al Shabaab and Robow could not be reached for comment.

"We have prepared many troops to reinforce Robow in case they begin fighting him. Your enemy’s enemy is your friend," he said.