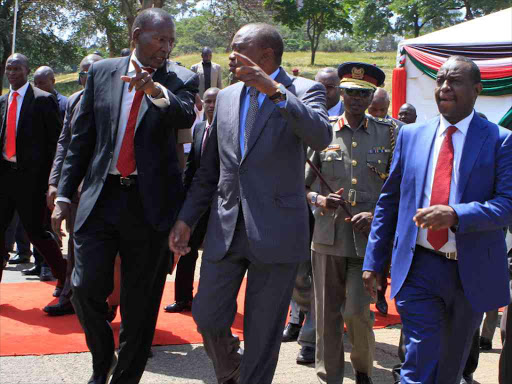 The Jubilee administration has established new administrative units including eight sub-counties, a number of divisions and locations across Kenya.

Only 39 days are left to the August 8 general election.

The national government has also created hundreds of sub-locations as it seeks to stamp its presence countrywide.

Districts are referred to as sub-counties in the 2010 constitution which heralded a new national government administrative structure that replaced the colonial provincial administration.

In the Kenya Gazette, Interior Cabinet Secretary Joseph Nkaissery said he created the new administrative units with the approval of President Uhuru Kenyatta.

The units, Nkaissery said, will enhance

co-ordination of national government functions and service delivery at the grassroots.

In Nairobi county's Starehe sub-county, the national government has established Ngara and Landi Mawe as divisions with Muthurwa,

Railways, Kiwanjani, Jamhuri and Tetra Park have been named new sub-locations in the capital city constituency.

Lang'ata sub-county has a new division named South C, with South C and Upper Hill as locations and Wilson and Kiang'ombe as sub-locations.

The creation of sub-counties is seen as strategy to increase employment opportunities for the youth during recruitment of the military and other forces.

Slots available in the forces are usually allocated per sub-county across the country.

Critics of Jubilee, however, may view this as part of the ruling alliance's scheme to woo voters by dangling carrots ahead of the polls.