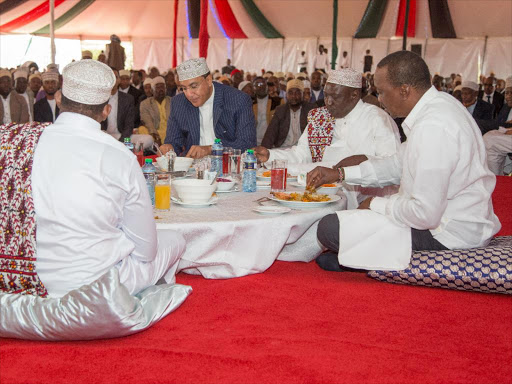 President Uhuru Kenyatta and Deputy President William Ruto share a meal with members of the muslim community during the Idd-Ul-Fitr luncheon at State House, Nairobi. Photo/PSCU

Speaking after the luncheon the President announced that the government will award charter to Umma University to enable it discharge its mandate in accordance with the education policy.

He also said the government will look into the request to re-open Nguluni Reverts Polytechnic in Machakos County.

announced the award of the Charter to Umma University after getting a request from Supreme Council of Kenya Muslims (SUPKEM) National Chairman Professor Abdulghafur El-Busaidy.

Umma University which is accredited by the Commission for University Education has two campuses in Thika and Kajiado.

The President assured the Muslim leaders of his commitment to ensuring all Kenyans enjoy equal rights as enshrined in the constitution.

He said for the last four and half years his government has continued to implement the constitution to ensure the rights of all Kenyans are protected.

“What we want is to ensure we fulfil what is enshrined in the constitution, that the civil liberties of all Kenyans, irrespective of their religious or tribal backgrounds are protected and safeguarded,” the President said.

The President said despite the opposition propaganda he would continue to rally all Kenyans to unite and develop a strong and stable nation.

“I don’t know how to do propaganda like our friends, what we want to continue doing is to make Kenya an all-inclusive society where everybody is able to enjoy their rights as enshrined in our constitution,” said the President.

The Deputy President said since taking over the leadership, Jubilee Government has been working hard to ensure Kenyans live together peaceful by disregarding divisive politics.

He said it is because of the President’s desire to unite Kenyans that for the first time in the history of the country, the government has many Muslims appointed to key positions in public service.

“Our Muslim brothers are gentle because they believe in God. We have many of them appointed in various positions of Government and they are committed to service. We are very proud of their contribution in making this country great,” said the Deputy President.

The Deputy President said the hallmark of Jubilee administration is that of brotherhood and friendship as opposed to the opposition which thrives on tribal divisions.

Cabinet Secretary Najib Balala and Majority Leader in the National Assembly Aden Duale said at no time in the history of Kenya have so many Muslims been recognized and given opportunity to serve as done by the Jubilee Administration.

CS Balala said through Jubilee Governments efforts, Muslim communities are today able to access basic services including Identity Cards, Passports and other legal documents without any problems just like other Kenyans.

“ You are the only President when it is Ramadhan you do Iftar for us , when it comes to issue of dates you give us duty waiver and also donate your own dates, when it comes to food during Ramadhan you deliver for us food, when it is Eid Alhaj you gave us cows to deliver to the poor. Today for the first time in the history of Kenya you have hosted us for Idd baraza,” said CS Balala.

Other speakers included SUPKEM Secretary General Adan Wachu and the Chairman of the Council of Imams and Preachers of Kenya Sheikh Abdalla Ateka.

The luncheon was also attended by several Governors, Mps, diplomats and aspirants of various political positions.

Post a comment
WATCH: The latest videos from the Star
by WILLIAM MWANGI @memwarwilliams
News
26 June 2017 - 18:00
Read The E-Paper