Elephant population in Tsavo up by 14.7% over three years 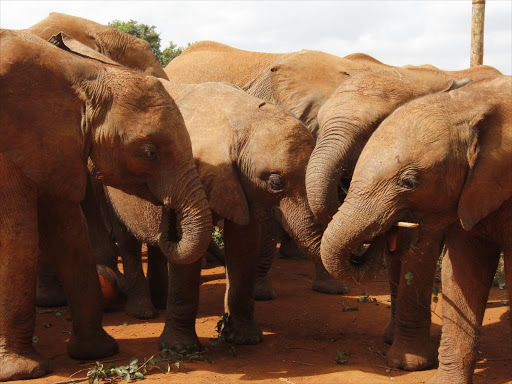 Elephants at David Sheldrick Wildlife Trust in Lang'ata which is a safe haven./FILE

The elephant population in Tsavo-Mkomazi Ecosystem has increased by 14.7 per cent over the last three years, the latest survey has shown.

He was speaking during the release of findings at the KWS headquarters at Langata.

Mbathi said a total of 12,866 elephants were counted; 12,843 in Tsavo Ecosystem and 23 in Mkomazi National Park during the census.

The 2017 dry season aerial census was carried out between February 12 and 21.

Mbathi said that a total of 1,167 carcases were recorded during the survey.

He said that only three and 27 fresh and recent carcases respectively were encountered during the survey.

Overall, there was 8.3 per cent carcas ratio for the Tsavo-Mkomazi ecosystem, he said.

The population of Buffalo counted in Tsavo-Mkomazi ecosystem during the February 2017 census was 8,623, which is about 46 percent increase compared to 5,912 Buffalo recorded in the same ecosystem in 2014.

The 2017 census indicated that the ecosystem supports a large number of giraffes totalling 4,323 compared to 2,891 giraffes counted in 2014 census. Group sizes of up to 80 individuals were recorded in 2017.

This represents an increase of 49.5 per cent, which is a very good result considering the threat giraffes are under due to poaching for meat.

The census also established that there was an increase in human activities within and around the protected areas compared to the situation in the previous years.

"Incidents of charcoal burning are on the rise, as well as the number of livestock in the ecosystem, both of which pose a threat to wildlife and their habitat," Mbathi

KWS plans to carry out further investigations on elephant poaching threat levels in Galana Ranch and Tsavo East National Park northern side where a high carcass ratio was found with a view to taking corrective measures.

Tsavo-Mkomazi aerial census is a regular cross-border survey undertaken every three years within protected areas and their immediate neighborhoods in both Kenya and Tanzania.

The protected areas covered during the census include: Tsavo East, Tsavo West, Chyulu and Mkomazi National Parks as well as South Kitui National Reserve, while the adjoining neighborhoods include Taita, Kulalu and Galana Ranches.

The census commenced with a training component where all participants and especially the observers underwent rigorous training to ensure that they were able to capture the right data.

The objectives of the census were; determine the number and distribution of elephant carcasses, and calculate a carcass ratio as the key indicator of mortality trend and determine the impact of poaching on the elephants population in the Tsavo-Mkomazi ecosystem.

It also aimed at understanding the distribution of elephants in relation to distribution of available water, map human activities inside and outside the protected areas.

These include, logging, settlements, farming, and charcoal burning and document the distribution and number of livestock, that is, cattle, camels, goats and sheep , and donkeys, in relation to elephants and other large mammals in the ecosystem.

Data was captured by observers in the aircrafts using GPS and digital voice recorders. Flights were made along pre-established transects at altitudes between 300-400ft above ground across the Ecosystem.