Raila tallying centre to get results 8 hrs after voting 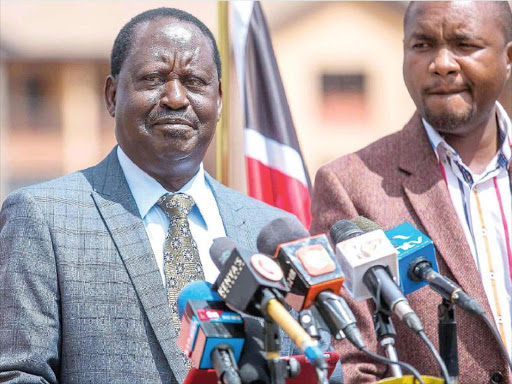 The IEBC has seven days to announce the winner and NASA could leave it in the dust on August 8. Polls close at 6pm.

Chief Raila Odinga is working with IT experts, mostly from Ghana and Germany, to forge a secret 'win-in-spite-of-rigging' system and super-fast tally, experts tell the Star.

The team leader worked for the US space agency NASA and devised the vote tallying system in Ghana where the opposition won in December last year.

It includes a mechanism to ensure no votes are stolen or added.

The tallying plans are known only to a select few in the presidential secretariat. "We need secrecy on this issue," a source familiar with the manoeuvres said.

"The system is intelligent enough to know how many voters are registered in each polling station and if there is any attempt to inflate the figures the system will reject (them)," one foreign expert told the Star. Experts are already in Nairobi.

The Jubilee Party dropped its earlier vociferous objections to NASA's parallel tallying plans and centre — and it is establishing its own.

The Independent Elections and Boundaries Commission had warned NASA against its plans but later said parallel tallying was acceptable as long as it did not announce results and declare a winner.

In a strategy to thwart what he calls perennial vote rigging, Raila and his techies have developed an application that simultaneously will transmit results from the polling station to both constituency and national levels.

NASA will then collate results from all 41,000 polling stations.

The eight-hour tallying will put pressure on the Wafula Chebukati-led electoral agency not to fiddle with tallies, as NASA strategists say happened in 2007 and 2013, when Raila lost.

Agents from the 290 constituencies are being trained to work in constituency collation centers. Polling station agents will send results immediately they are declared. These will be captured by constituency teams and transmitted to Nairobi.

Raila has spoken of his 'adopt a polling station' strategy, without much detail.

Raila is working with IT professionals from Ghana and Germany, some believed to have worked with Akufo-Addo, a close friend to the former PM.

The ODM leader attended Akufo-Addo’s inauguration in Accra and held talks with the long-time opposition leader, who like Raila, had failed lost thrice.

The technology team was introduced to NASA's Pentagon in April at a retreat in Kilifi where they explained how to defeat a 'hostile government'.

Information on identities and backgrounds of the experts is scanty.

However, the Star has learnt Akufo-Addo had engaged Joe Anokye, telecommunications engineering service manager at US space agency NASA, to devise his tallying system.

Through his efforts, the Ghanaian opposition was able to predict victory almost eight hours after polling stations closed.

NASA is also consulting Jesse Boateng, who also worked with the Ghanaian leader during the election. Boateng is Vice President at US firm 270 Strategies that helped Hillary Clinton in her presidential bid.

On March 28, Raila said his team will deploy at least 10 agents to every polling station. Some will take videos and photos of electoral materials, including Forms 34 and 36, which would be irrefutable evidence in case of a challenge.

Using polling stations' voter registers, agents will monitor who has not voted, trace them and ensure they vote.

Theopposition has termed KPMG's audit of the voter register “shoddy and a major betrayal of the people of Kenya."

KPMG says there could be 1,037,260 registered voters who could have died between November 2012 and December last year.

“Biometric registration should be the primary mechanism to identify voters during the election, because in the event this is not applied, there is likelihood of dead persons participating,” KPMG executive director Josphat Mwaura said.

As the basis for its slogan “10 Million Strong”, NASA says if 2013 voting patterns are maintained, the counties Raila won currently have 10,547,913 registered voters. This compares with 7,556,609 in the counties Uhuru won.

A Raila victory hinges on turnout.

The new strategies aim to correct mistakes of 2013. Many agents were not paid and polling stations in Jubilee strongholds had no agents.

On Friday, the Court of Appeal will rule whether presidential results declared at the constituency are final.

Raila's team wants IEBC bosses barred from changing constituency results. This is strongly opposed by the IEBC and Jubilee.

During the 2013 battle in the Supreme Court, Cord sought to prove that polling station results were altered at the Bomas of Kenya, the national tallying centre.

Lawyer Kethi Kilonzo played videos of the announcements of presidential results in some counties, which she said differed from those announced by the electoral commission and reflected in Form 36.

She said, for example, Uhuru Kenyatta garnered 317,881 votes in Nyeri county, which was announced by the county returning officer. However, at Bomas of Kenya, the IEBC gave Uhuru 318,880 votes — an extra 999 ballots.

Raila scored 6,075 votes as announced at the county level but that tally was reduced to 5,638 by the IEBC.