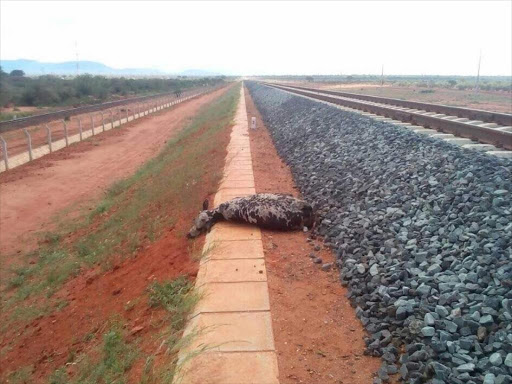 An SGR passenger train on Saturday knocked down a cow killing it instantly.

The cow is believed to have strayed into the line after elephants reportedly destroyed the fence bordering the line.

The train was headed to Mariakani at the time of the accident.

"After knocking the cow, the train slowed down but continued with its journey to the station," officials who sought anonymity said.

The official said many pastoralists graze their animals in that section since the fences have not been mended.

"Herders graze their animals in the area because the grass is greener on the other side of the line," the SGR official said.

This is the first mishap of the Sh327 billion Standard Gauge Railway since it was launched on May 31.

The SGR is expected to transform the economy and landscape of Kenya, the same way the lunatic train did.

The passenger train has reduced travel time between Mombasa and Nairobi to between four and five hours.

It takes travellers an average of nine to 10 hours to travel by bus between the two cities.

The line replaced what was called the Lunatic Express - a railway line that linked the Coast to the shores of Lake Victoria.