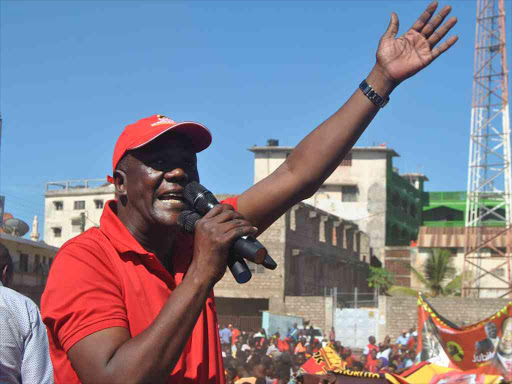 Kilifi North MP Gideon Mung'aro has pledged to revive the ailing tourism industry if he is elected governor in August.

The Jubilee Party point man at the Coast said the current administration led by Amason Kingi has failed in the sector.

He said despite tourism being the backbone of the region's economy, the current county administration has ignored its gains.

The legislator said voters must not accept a situation where key employment opportunities are shattered.

A number of tourist resorts in Malindi and Watamu closed down due to lack of business. The situation was blamed on terrorism.

"During my tenure as Malindi mayor, business was booming because of the proper structures we put in place," Mung'aro said on Friday.

"But since Kingi came to power, he could not utilise

the billions allocated in the county to promote tourism."

He spoke during separate meetings at Cleopatra hall in Malindi and Tezo in Kilifi South.

"As governor, it will be easier to work with the national government and push for Kilifi's development agenda," he said.

The MP said Kingi has failed to push for key development projects that will improve the livelihoods of the locals.

He castigated the incumbent for presiding over corruption and mismanagement of county resources.