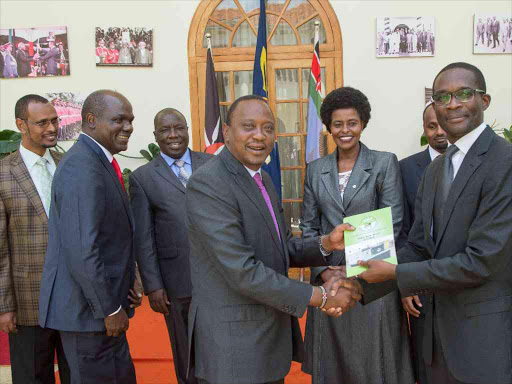 to the awarding of a ballot papers printing tender to

The Dubai-based company is to print about 120 million ballot papers, election results forms and poll registers for the August 8 general elections.

Raila Odinga said on Tuesday that they have information indicating the firm has had contracts with Jubilee officials for at least three years.

"It has become abundantly clear that the awarding of the tender was influenced by Uhuru. The President cannot be the procurement manager in chief for IEBC."

Mudavadi also called for the sacking of IEBC CEO Ezra Chiloba and Director of Election Operations Immaculate Kasait for their alleged involvement in the matter.

"They were the contacts for State House. These two should immediately step aside and investigations should commence into their conduct and tenure at the IEBC," he claimed.

"She reports on a weekly basis to State House where she gives status updates to Head of Public Service and Chief of Staff Joseph Kinyua," he said.

Kasait is also a member of a Jubilee-leaning organisation known as the Mt Kenya Foundation which operates from Nairobi's Parklands area.

"The activities of this foundation are shrouded in mystery," he said.

The Amani party leader added that the office is accessed

"Kasait provides frequent updates on the state of affairs at IEBC to this group."

Mudavadi asked Uhuru to come clean on his and his family’s links with the firm and state his interests in the contract the firm was awarded.

"The interest, in our view, is clear. The President and his Jubilee team are looking for a firm that can supply extra ballot secretly as was the case in 2013," he said.

"The issue of delay is only an excuse to create a crisis to justify the giving of this tender to Al Ghurair."

Earlier, IEBC chair Wafula Chebukati said the rhetoric on the procurement of ballot material is dangerous, following criticism by Raila.

narrative was "dangerously derailing" them from fulfilling their constitutional obligation on the elections.

undertook due diligence which confirmed

the firm is qualified to undertake the printing of ballot papers," he said.

the commission engaged the political stakeholders before making the decision.

A number of government tenders have caused political tension, which is threatening to poison the atmosphere ahead of the August 8 polls.