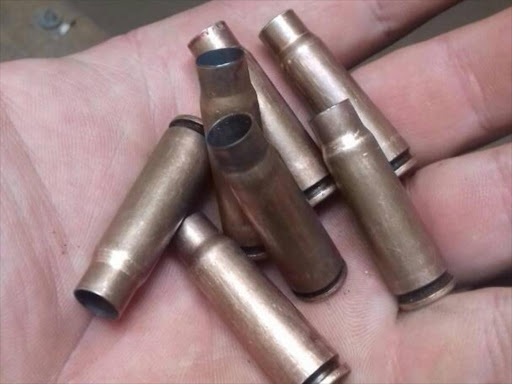 Bullet casings collected from the scene where a ranch worker was killed by Pokot militias on April 20 at Ol Maisor, Laikipia. /COURTESY

Opposition leader Raila Odinga has said his faction is not complicit in the armed raids targeting the white-owned Laikipia ranches.

The ODM leader denied accusations by local leaders that he had encouraged violence following his calls for the dismantling of the properties.

The calls for land reform sparked outrage and led to appeals for politicians to promote stability in the conflict-prone region.

This was after Raila told 'The Times' that a government led by him would seek a 'long-term solution' to violent land invasions in Laikipia.

He said: "This will be in the form of 'rationalisation' of the large ranches, many of which are white-owned."

Raila was quoted in the UK newspaper questioning the suggestion that politicians had exploited the tensions for favours ahead of the August election.

"We are not complicit at all, it is a conflict that’s avoidable and requires government intervention to come up with a long-term solution to the problem."

"Some ranches are half a million acres of land, they are too big and the people don’t even live there, they live in Europe and only come once in a while," he said.

"I think there’s a need for a rationalisation of that policy to ensure that there’s really productive use of that land than just keeping it for speculation purposes."

Raila, the Times reported, said that armed pastoralists who have invaded private land had legitimate reasons.

During the invasions ranch owners, workers and journalists were attacked. The invaders also set fire to property.

In the face of the circumstances, the opposition chief called for the government to make a deal with ranchers to lease pasture for those in need.

"In the last two years of drought, these pastoralists have run out of pasture for their animals. Those animals in turn starve and die," he said in an interview.

He said the ranchers have water boreholes and quite a bit of grass adding that the pastoralists only get into the ranches to feed their animals.

"That’s why the conflict arises. The ranchers complain and sometimes there are attacks."

"It is not really politicians. It is an issue of poverty which abounds in the area that’s causing these issues," the ODM leader said on Monday.

He added the resentment arises from where animals are dying from lack of pasture and water, yet these are in abundance at the ranches.

Raila, who is NASA presidential flag bearer for the August poll, also rejected the argument that the ranches attract tourists and investment for the local economy.

The tourists just come to one lodge. They are not spending their money in the local economy," he said adding that the money goes back to Europe.

"There’s no need for that kind of tourism."

The remarks generated intense debate, with some comparing him to Zimbabwe's President Robert Mugabe.

Others claiming The Times was being used by his rival President Uhuru Kenyatta's camp.

Dennis Onyango, Raila's spokesman, said the comments attributed to the ODM leader were out of context.

"His comments had been 'misplaced'. No one has tabled any evidence of Raila inciting Laikipia residents to violence," Onyango told the Times.

"What he has called for is for the government to broker an understanding between the ranchers and locals and help bring peace between the two groups."

In a statement on Tuesday, Laikipia Farmers’ Association said they are the biggest employers with the more than 4,446 people working at the ranches.

The agency rejected Raila's claims saying all the ranches are owned by Kenyan citizens.

"Whatever their racial origins, or by Kenyan companies or Kenyan trusts. These are people who have constitutional rights to protection of their property and their lives," it said.

"For Laikipia’s success to continue, local people need peace and the rule of law."