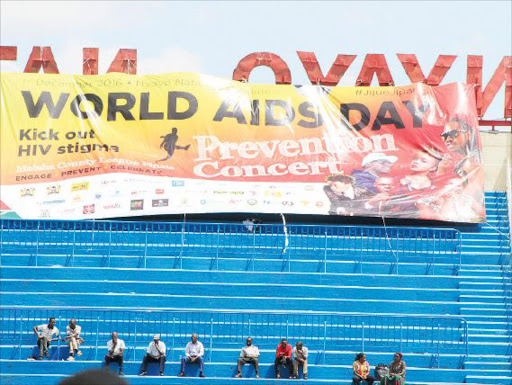 People sit under a banner during at Nyayo Stadium, Nairobi, on December 1, 2016, during a function to mark World Aids Day /MONICAH MWANGI

Only about 6,200 children were born

with HIV in Kenya last year, down

The new data means the country

is on course to eliminate mother-to child

transmission of HIV, which now

for more than 90 per cent of

but is entirely preventable if the

“If we sustain the momentum then

we can completely eliminate transmission

Caroline Olwande, a pharmacist with

Nascop said currently only 85 per

cent of mothers with HIV have been

placed on ARVs to prevent the virus

passing on to their babies.

zero transmission if all positive mothers

are placed on ARVs during and after

However, only eight in every 10

which means the country would need

a complete coverage of all hospitals to

Nascop has now developed a new

strategy, which places emphasis on

“We are concerned about the increase

of new infections among girls

and young women, many of whom

unknowingly pass on the virus to their

or breastfeeding,” director of medical

The data also showed a spike in infections

during the nurses’ strike last

Nduati said this year will also see a

spike because of the ongoing nurses’

“The entire mother and child

healthcare in hospitals is run by nurses,

but now women go to hospitals

She will be hosting a summit,

where leaders will commit to prioritise

resources for the elimination of

The participants will be questioning

why Kenya continues to experience

commitments to tame the challenges.