We’re ready to deal with you firmly, Uhuru warns criminals 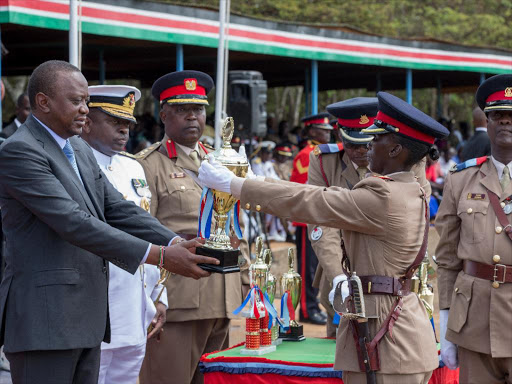 President Uhuru Kenyatta has warned leaders and criminals perpetrating violence in the North Rift and Laikipia that the government will deal with them firmly.
He said violence has escalated in the North Rift, with communities displaced, lives lost and property destroyed, but the government is in the process of restoring order.
“I want to be perfectly clear. These perpetrators of violence and lawlessness in the North Rift, Laikipia and elsewhere will be dealt with. There is no room for those who want to divide us,” he said on Friday.
Uhuru spoke during a military passing-out parade at the Moi Barracks Recruits Training College, Eldoret.
“There is absolutely no room for those who would raise their hands against their brothers and countrymen,” he said.
He warned that leaders who incite supporters to violence will “be made to learn their lessons”.
Uhuru told the recruits to uphold integrity, flawless discipline and implicit loyalty to their superiors, colleagues and institutions established by law.
“Kenyans expect these things of you not just because of the importance of your mission, but also because of the reputation and importance of the institution that you formally join today,” he said, reminding them that KDF has a long-standing tradition of upholding the highest of standards — the reason why they are invited to serve in peacekeeping missions internationally.
Uhuru paid tribute to security officers, who have lost their lives in the line of duty, saying, “These men and women from every branch of our security forces gave everything they had for the country they loved.”
He condemned terrorism, saying it is unacceptable in the modern world.
The President urged Kenyans to believe in God — based on their freedoms of worship — adding that this shows strength.
“A country whose people are free to choose their leaders is stronger than a country in which bloody violent extremists impose their will. Our freedoms make us better than the enemy, our freedoms make us stronger than the enemy,” he said.
Uhuru said KDF has made significant strides in the war on al Shabaab and degraded the terror group’s ability to carry out attacks in the country.
He attributed the establishment of successive civilian government in Somalia to the the unyielding efforts by the Kenyan military forces to maintain peace in the country.
Uhuru was accompanied by Interior CS Joseph Nkaissery and Chief of Defence Forces Samson Mwathethe.