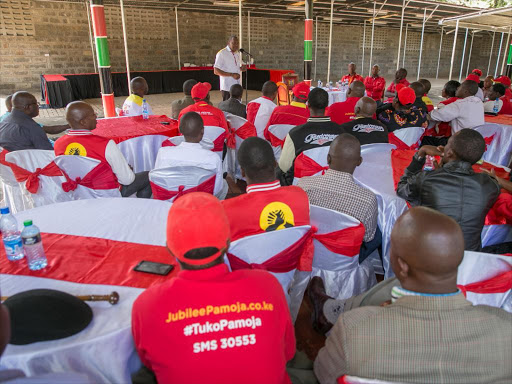 JUBILEE Party is pushing for a firm grip on swing vote areas for a first round win and securing many seats by compelling all independent candidates allied to the party to step down.

The ruling party is also piling pressure on independents in its Rift Valley and Mt. Kenya strongholds to quit and support candidates with JP tickets.

President Uhuru Kenyatta and Deputy President William Ruto, during their first campaign in Nakuru after being cleared by the IEBC to defend their seats at the General Election, successfully convinced Governor Kinuthia Mbugua to step down for his arch rival, former Nakuru Town MP Lee Kinyanjui. Uhuru and his deputy held lengthy negotiations with Mbugua at State House, Nakuru, to drop his independent candidature for Kinyanjui, who secured the JP ticket.

“We spoke last night with the two leaders and Mr Mbugua has agreed to step down for Kinyanjui,” Uhuru said during a rally in Molo town.

Independent candidates have defended their move on grounds the officers who conducted the primaries were biased in favour of their rivals and that the exercise was marred by many irregularities such as rigging.

Mbugua confirmed that he quit, “for the sake of unity among Jubilee Party supporters and the love I have for the party”.

The President has insisted that JP ticket losers will be “accommodated in other capacities” and that they should support winners and his government.

Lawmakers including Jamleck Kamau (Kigumo), Maina Kamanda (Starehe) and former Foreign Affairs PS Thuita Mwangi are among JP candidates who have bowed to pressure from their party leaders to quit after losing.

Jamleck, who was eyeing the Murang’a governor seat, was defeated by the incumbent Mwangi wa Iria. Musician Charles Njagua, alias Jaguar, floored Kamanda for the Starehe ticket. Thuita’s bid for Laikipia governor suffered a setback after the incumbent Joshua Irungu trounced him.

“I have decided that I will not vie for Murang’a governor as an independent candidate, but will instead focus on my mandate as Kigumo MP and also campaign for President Uhuru’s reelection bid,” Jamleck said.

Jubilee Party has warned independent candidates in at least 10 swing vote counties in the country to step down or it will campaign against them.

Uhuru has been soft on independent candidates who lost in the party primaries but support his reelection, unlike National Super Alliance leaders led by Raila Odinga, who have dismissed independents backing his election.

Nairobi, Kajiado, Narok, Mandera, Garissa, Samburu, Marsabit, Isiolo, Trans Nzoia and Kisii are among swing vote counties Uhuru and Raila are keenly banking on for a win in the upcoming General Election after ensuring that their strongholds are intact.

Nominated MP Johnson Sakaja, among Uhuru’s campaign team, said they want independents in these battleground counties to step down and support JP candidates to ensure their votes are not split for NASA to win.

“We are and have been talking to many of them to step down. The candidature of pro-Jubilee independents helps NASA and not us. The biggest beneficiary of dividing votes by pro-Jubilee candidates is our opponent,” Sakaja told the Star.

He disclosed that some have agreed to drop their candidature while others are adamant.

“We have been talking to independent Nairobi MPs and MCAs. The adamant we wish them well, but we are going to campaign heavily against them,” Sakaja said.

The issue of independent candidates in the Jubilee camp has threatened the ruling party’s unity. Candidates with JP tickets have demanded their party leaders compel independents to drop their bid.

“You are in a party because you believe in its ideals. If you didn’t win and you have exhausted all appeals, ideally it is prudent to support the winner. Mbugua has shown exemplary leadership and loyalty to the party. We are optimistic a good number will pick his example,” Sakaja, also JP’s nominee for the Nairobi Senate seat, said.

Bumula MP Boniface Otsiula backs his party’s move to pile pressure on independents to step down to ensure “our adversaries” do not reap big from split votes.

“If this is in the interest of the party and the candidates still have its interests at heart, regardless of the outcome of the nominations, then there is nothing wrong to willingly or be compelled to step down for those who won the tickets,” Otsiula said.

They have been asking Ruto to prevail upon Buzeki to withdraw from the Uasin Gishu governor race as an independent candidate.

Buzeki insists he cannot quit from the race because his supporters “unanimously” agreed to back his governorship interest.

“I am not stepping down for anybody and am not going to negotiate with anyone. I am firmly in the race. I have an agenda for the people of Uasin Gishu based on the manifesto I have and that can only be decided on the ballot on August 8,” he said.

Nairobi JP candidates led by their governor candidate Senator Mike Sonko on Thursday during a strategy meeting told pro-Jubilee independents, including Peter Kenneth, who is eyeing the governor seat, to quit within a week and vowed to petition Uhuru to force them if they fail to.

“Let people not term you [Kenneth] as a spoiler always. We know it is your democratic right to contest but please come we work together,” Sonko said.

Roysambu MP Waihenya Ndirangu concurred with Sonko in extending an olive branch to Kenneth, telling him that, “it is a bit late to prove a point”.

Buzeki, however, maintains that candidates with tickets are afraid of independents after realizing that they are not popular with voters, hence their fear of losing in August.

“I want to tell these guys to just relax because if they are as popular as they have alleged on numerous occasions, then they should comfortably

sit and wait for August 8 to give us the lashing of our lives. This issue of causing friction and saying independents are spoilers and don’t stand a chance to win should not bother them,” Buzeki said.

Nairobi woman representative and JP nominee Rachael Shebesh, however, said, “There is no day we will accept to be defeated by someone who was floored during the Jubilee nominations. If you are an independent, you are our enemy.”

Buzeki warned that forcing independents to quit will backfire against Jubilee by leading to low voter turnout for Uhuru in the August polls.