KDF officer feared dead after crossfire with bandits in Baringo 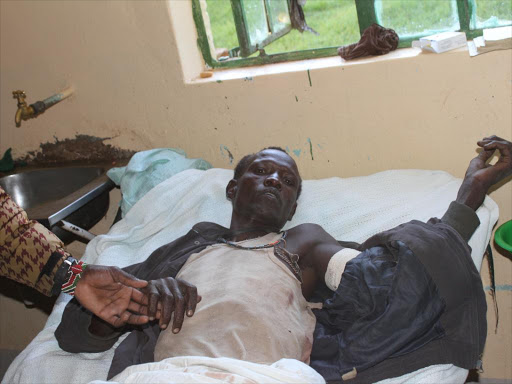 Tugen herder Joseph Chepkangor is treated at Baringo County Referral Hospital after being shot on May 20, 2017. /JOSEPH KANGOGO

A KDF officer is feared dead after fresh attacks by suspected Pokot bandits in Noosukro, Baringo county, on Friday.

Eight other security officials were seriously injured during the 9am crossfire with the bandits. Five are KDF officers and two from GSU while the other two are Kenya Police Reservists.

Amos Olempaka, a human rights activist in the area, said the shootout took place as officers carried out patrols.

"As we speak, KDF has landed with a chopper to ferry the injured soldiers to Nairobi, while I have offered my vehicle to transport our injured KPR s to St Mary's Hospital in Gilgil," Olempaka

He said tension remains high in Arabal, Chebinyiny and Mukutani after bandits made away with 300 goats on Thursday.

"There is no point in big officers watching as innocent people, including their own officers, are killed like goats," he said.

"I am only aware

that two GSU officers and a KPR were injured. The rest is heresay," he said.

But he said he will update the press in case of developments.

The incident comes a day after bandits shot

three Tugen herders who were driving away over 500 goats in Ngaratuko and Loruk areas in Baringo North subcounty.