12 charged with SGR vandalism, to serve life in jail if found guilty 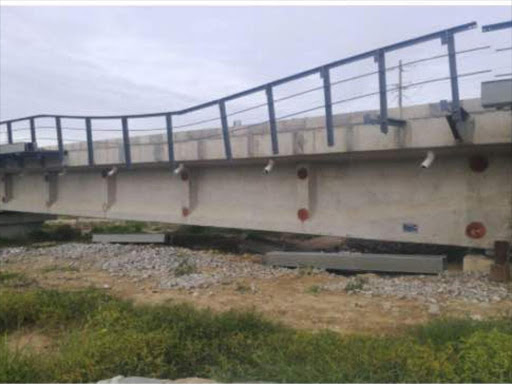 Twelve people were on Friday charged with sabotaging the Standard Gauge Railway few days before its official launch.

They were jointly charged with six counts each following the accusation that they intentionally endangered the lives of SGR users by impairing the line's performance.

They allegedly committed the crime on May 26 in Mwavumbo area, Kwale county.

The 12 were also accused of destroying scrap metals from the SGR, engaging in organised crimes for the purpose of obtaining financial benefits and endangering lives of the SGR train users.

They were also alleged to have been found dealing in scrap metal business without a license on June 1 at their shops in Taita Taveta, Kwale and Mombasa.

They all pleaded not guilty to the charges.

So far, 20 people have been arrested for vandalism and theft of the SGR protective bars.

Senior state counsel Alexander Muteti asked the court to deny bail for the accused terming them a flight risk.

Muteti said the accused persons were likely to abscond court due to the nature of the charges.

He said the maximum sentence for persons found guilty of sabotaging the nation's economy was life imprisonment.

"To allow someone who was about to bring down the economy of the country to roam freely in the streets is so unfair to the rest of Kenyans."

He said the destruction was intentional and well calculated since it was executed few days before the railway was supposed to be officiated by President Uhuru Kenyatta.

SGR vandals will be hanged to death if President Uhuru Kenyatta implements a warning he issued while launching the services in Mombasa on May 31.

Just like IG Joseph Boinnet, he noted the destruction amounts to economic sabotage, a capital offence whose punishment in Kenya is hanging.

Muteti further noted that the police were yet to complete their investigations which are bound to be interfered with in the event the suspects are released.

However, defense counsel Dennis Omare said the charges were bailable.

He said the police have had enough time to finish their investigations as the accused had been detained for eight days.

Senior principal magistrate Lilian Lewa set the ruling on whether to release them on bond for June 12.

Post a comment
WATCH: The latest videos from the Star
by MALEMBA MKONGO @malemba_mkongo
News
09 June 2017 - 18:00
Read The E-Paper