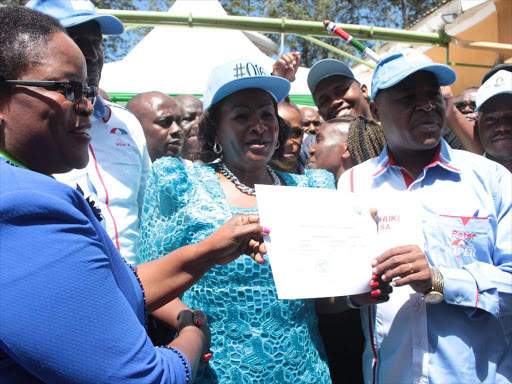 The IEBC's disputes tribunal has nullified Wavinya Ndeti's nomination as Wiper's Machakos governor candidate saying a complaint against her was valid.

filed a petition saying Ndeti is a member of Wiper Party led by Kalonzo Musyoka and her Chama Cha Uzalendo.

Kyalo noted the politician is a candidate for governor on a Wiper ticket yet she is still CCU's leader and member.

He said the party allowed a stranger to participate in its primaries in violation of the Elections Act.

The tribunal further heard that Ndeti became a member of Wiper on April 6, a day after the defection deadline, and that her

Ndeti dismissed the claims made before the tribunal, saying her nomination was valid. She further argued through her lawyer that she was not a member of CCU.

The politician had asked the committee to dismiss the complaint, which she termed witch-hunt aimed at reopening issues previously determined by the tribunal.

Ndeti was declared winner after a rematch against Deputy Governor Bernard Kiala.

was to face incumbent Alfred Mutua, who earlier dismissed Wiper, Kalonzo Musyoka's party as keener on political battles than the people's welfare.

The Governor said he will seek re-election based on his key projects and the desire to help Machakos residents change their lives.

"On August 8, I will beat my opponents [by a big margin] because I am up to the task," he said.

Ndeti had been termed Mutua's biggest rival and Kalonzo said she has the potential to become the county's first female governor.