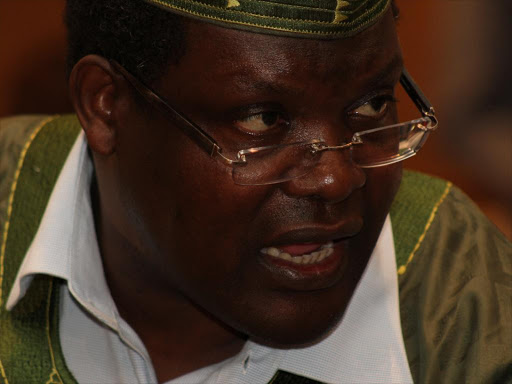 Nairobi governor aspirant Miguna Miguna has accused the media of "pumping fake news" about him following reports the IEBC blocked him from vying.

he presented 500 signatures in JPEG, as opposed to the Excel format.

The aspirant said: "So, the fake news...that Miguna has been blocked...is completely false. I have more than 5,000 names, not the required 500."

by Citizen TV, said the media promotes the agenda of "thieves and cartels".

"...your agenda is to promote the interests of thieves, crooks and drug dealers. You have been paid by drug dealers to perpetuate impunity in Kenya,” he said.

"Your agenda will not be accepted. The time has come for brown journalism to come to an end...I am in Kenya to put it to an end."

The lawyer told off

decision made at the last minute.

"That is not a requirement by law...they had not

They said they had been called by their legal department to ensure that is done today," he said.

Miguna further said there was nothing wrong with his choice to drop James Gathungu as his running mate in favour of Karen Wangenye.

"I have the right to pick whoever I want...there is no need to raise questions. I am allowed to choose a running mate whenever I want. In fact I did not change my running mate," he said.

The aspirant had unveiled Gathungu, 24, saying this was a spirited bid to incorporate youths into leadership.