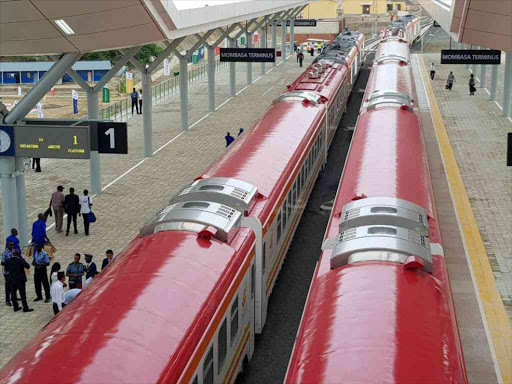 Trains in Mombasa during the Standard Gauge Railway launch by President Uhuru Kenyatta, May 31, 2017.

SGR vandals will be hanged to death if President Uhuru Kenyatta implements a warning he issued while launching the services in Mombasa on Wednesday.

A section of the new line was damaged by unknown people in Mariakani.

Pictures showed a gap in a section of the guardrail, an incident that resulted in claims of sabotage.

Engineers scurried to carry out repairs before the launch and the four suspects who were later arrested will be charged with organised crime, DPP Keriako Tobiko said.

(I acknowledge that the presidency gives me the right to pass laws...those found vandalising the infrastructure...I will pass a law for them to be hanged)."

Uhuru said vandalism will not be tolerated or a few people allowed to interfere with the rights of the present and future generations.

Just like IG Joseph Boinnet, he noted the destruction amounts to economic sabotage, a capital offence whose punishment in Kenya is hanging.

“I'm the only one authorised to approve a capital punishment but I have never done it. I preferred pardoning the guilty and having them serve life imprisonment sentences,” he noted at the Miritini terminus.

“But those who will be sentenced for destruction of public property...God forgive me...I will approve their hanging.”

Uhuru, who wants to rule for another five years, said there are people who do not want to see the country develop.

The President, who has often highlighted development projects under the Jubilee administration, said it is such people who destroyed parts of the railway to make him look bad and give the impression that his administration is not working.

(This railway does not belong to Uhuru or DP William Ruto. It belongs to the government...it was constructed using money belonging to 45 million Kenyans)," he said.

(The services are for mwananchi, not the rich. We will ensure there is space for a matatu stage)."

not pay more than Sh700 for rides between Mombasa and Nairobi, contrary to what

“We have done our survey and found that bus fair from Mombasa to Nairobi is about Sh1,200. But for the SGR, it will not cost more than Sh700," he said.

(First class travellers will take care of themselves but mwananchi must not pay more than Sh700)."

KRC said Kenyans will pay only Sh900 for economy train rides between the cities under the 'Madaraka Express' service.

First class rides between the cities will cost Sh3,000.

Uhuru also announced it will cost less than Sh50,000, down from Sh100,000, to transport containers between Mombasa and Nairobi.

The President asked Kenyans and leaders not to complain about the project as hitches are expected in the first stages.

(Today is day one of operations. Let's join hands and not complain until the operations are seamless)," he said.

But Uhuru's warning is likely to put him on the war path with lobby groups and Opposition leaders who have already voiced concern about the cost of the railway project.

The government has spent Sh327 billion. Mombasa Governor Hassan Joho demanded an explanation for the extra cost of Sh100 billion and threatened to stop the launch but police barred him from attending.

Post a comment
WATCH: The latest videos from the Star
by NANCY AGUTU, @NancyAgutu and ERNEST CORNEL @OduorErnest
News
31 May 2017 - 09:00
Read The E-Paper