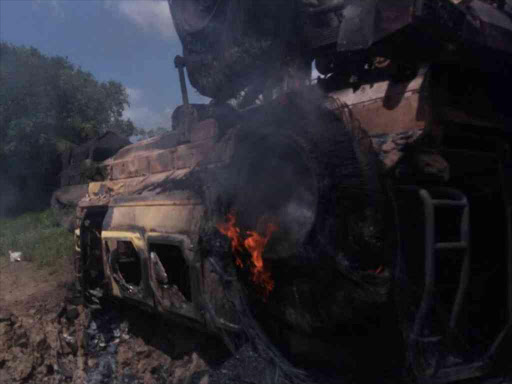 The police car that hit a landmine in Lamu leaving eight people dead, May 31, 2017. /CHETI PRAXIDES

of them police officers, were killed when their armoured vehicle hit a landmine in Baure area, Lamu, on Wednesday morning.

It is believed the device was planted by al Shabaab militants.

victim was a staff member.

The officers were on their way from Mangai​

to Mukoe in Lamu West to refuel the vehicle when the incident occurred at about 9am.

rushing to the scene to help.

They repulsed them and reported to the scene where they found the bodies.

The incident comes barely a week after eight AP

officers were killed in Garissa and Mandera.

Five of the officers were part of

Their vehicle was hit

Another three ‎APs were killed in Garissa when their vehicle hit landmine.

Mor e on this: