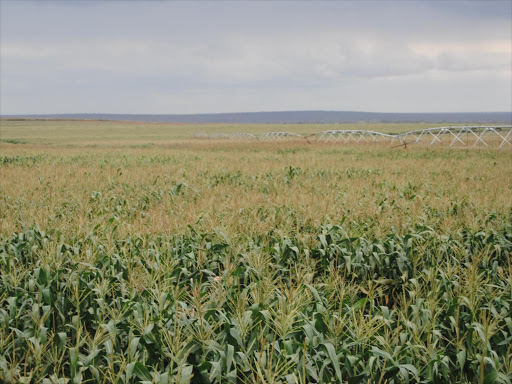 A view of Galana Kulalu test farm being implemented by the Israeli company Green Arava in the one million acre food security project. /Alphonce Gari

Kenya will fork out up to Sh50 billion to make the one million-acre Galana-Kulalu food security project feasible, the Jubilee government has said.
Deputy President William Ruto said water from neighbouring rivers is inadequate and can only irrigate up to 200,000 acres.
The Jubilee administration has, therefore, decided build a mega dam for between Sh40 and Sh50 billion to ensure adequate water supply.
Speaking during an interview on Citizen TV on Tuesday, Ruto said the construction of the dam was informed by advice given by experts from Israel.
“So what we decided and their [Israeli experts] recommendation was, instead of proceeding the way we were, it was better first to do a mega dam. And that is why we now have the Galana mega dam that will cost between Sh40 and Sh50 billion,” Ruto said.
“That dam will therefore make water available all year round to cover the one million acres.”
Opposition chiefs have often trashed the Galana-Kulalu project, a key Jubilee flagship project, as a white elephant designed to swindle the taxpayer.
But Ruto said the government’s long-term strategy to end the biting food shortage is irrigation.
“We have some irrigation going on but we are limited by the amount of water that we can get. And that is why we have rolled out a huge programme to build 60 mega dams around the country over the next three years,” Ruto said.
He said the dams will adequately irrigate two million acres.
The government’s pre-feasibilitily study of Galana-Kulalu that was done by Agri-green of Israel, Amiran Kenya and Environmental Consultants Ltd indicated the entire project will cost Sh1.45 trillion.
The study also warned it is not economical to divert water from Tana River for irrigation, which is 250km away in a rugged terrain.
“This has enormous cost implication and engineering challenge and makes the water delivery non-feasible and non-practical for construction,” the report said.
Despite the warning,

Jubilee has gone on with the project.