Cholera outbreak: Five hospitalised in Nairobi after a wedding feast 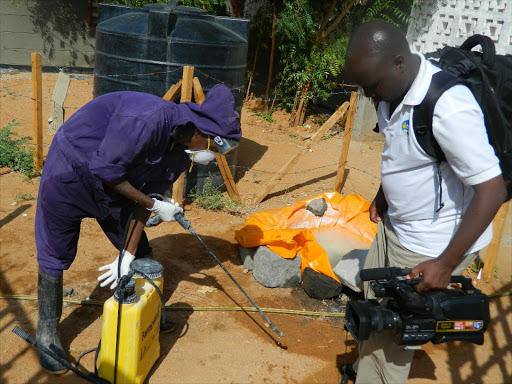 A journalist is disinfected before being allowed into a cholera treatment centre during a past outbreak. /FILE

The Nairobi county government has activated cholera treatment centres following an outbreak of the disease in the city.

Health executive Bernard Muia and chief officer Sam Ochola on Thursday said five cases of the disease have been confirmed.

"Five people are admitted to the Nairobi Hospital and laboratory tests have confirmed that they contracted the disease," Muia said.

He, however, said the disease “is an imported case” as the five who have been admitted had travelled to the city last weekend from Vihiga to attend a wedding in Karen.

"There was a wedding in Karen on Saturday and after they partied, people started having symptoms and signs of cholera and they were rushed to Nairobi Hospital. Other people have been discharged because they tested negative," he said.

There were reports three people died after contracting the disease in the city. But Muia could not confirm.

"I am advised that one or two passed away, but not in public health facilities. But I would say this is an allegation because we need to do a post-mortem," the executive said.

Speaking to journalists at City Hall, he said the county is on high alert and the disease surveillance team is on the ground monitoring the situation.

Cholera is an infectious and often fatal bacterial disease of the small intestine, typically contracted from infected water supplies and causing severe vomiting and diarrhea. It leads to dehydration.

It is caused by eating food or drinking water contaminated with a bacterium called Vibrio cholerae.

"Some people present with effortless diarrhea. This is where diarrhea comes without much effort and it looks like rice-water," Muia said.

Muia urged city residents to drink boiled or treated water to keep the disease at bay.

This is not the first time a cholera outbreak is being reported in Nairobi.

Heavy rainfall linked to the El Nino weather pattern can push up cholera cases in Africa, according to a study by researchers at Johns Hopkins University.